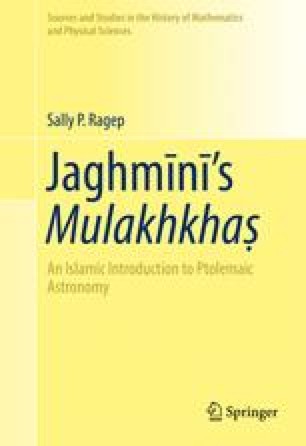 Commentary to the Edition and Translation

The Mulakhkhaṣ has three different preface versions; however, starting with Pref.[2], “The Introduction is about an explanation of the divisions of the bodies in general terms,” the three versions converge enough to allow them to be collated as a single version, with variants noted in the critical apparatus. The incipits, prefaces, and colophons of the five principal manuscripts that have been used to establish the Arabic edition are provided, with English translations, in § II.2: Description of the Manuscripts. All five contain Jaghmīnī’s original parameters; in general, these values are either Ptolemaic or ones that Jaghmīnī refers to as “Modern,” usually meaning from the ninth century (I.2[6]). Most of the later copies of the Mulakhkhaṣ and commentaries have updated at least some of these parameters, the most obvious examples occurring in the listing of the climes and their parameters (II.1) that can be shown to derive from Ṭūsī’s Tadhkira (see commentary on the second clime (II.1[4]). This provided a convenient means of differentiating witnesses that are closer to Jaghmīnī’s original version from those that have been updated.

Horizon Plane World Center Degree Latitude Comparative Chart Regular Order
These keywords were added by machine and not by the authors. This process is experimental and the keywords may be updated as the learning algorithm improves.
This is a preview of subscription content, log in to check access.