Responsibility in an Interconnected World 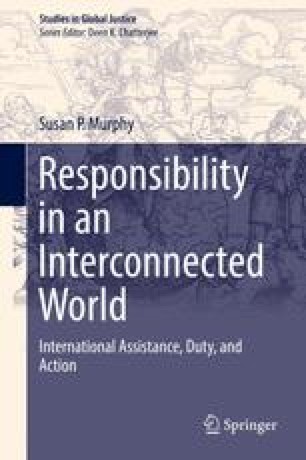 Responsibility in an Interconnected World pp 113-135 | Cite as

Adjudicating Between O’Neill and Sen on Assistance

This chapter adjudicates between the broad deontological and consequentialist frameworks of O’Neill and Sen to identify the most appropriate framework to guide action in the contemporary circumstances of assistance. There are a number of areas of overlap between these approaches as both seek to retain the imperfect nature of this duty, and also to place this duty into a wider moral landscape in which situated non-idealised agents are based. Using the idea of ‘practical’ to develop appropriate criteria for evaluation, it finds that an application and extension of a broad consequentialist approach provides a more practical framework to guide the actions of agents in the contemporary context. Three reasons are offered in defence of this claim. Firstly, I argue that a non-monistic pluralist theoretical framework provides a more inclusive moral basis to guide agents in the performance of this duty. Secondly, I argue a dualistic method of justification that blends both weighing of outcomes and testing of actions may remove and reduce conflict and manage uncertainty in a way that narrower methodological duty-based approaches cannot. In providing agents with a clear, but open framework for practical reasoning and evaluation, this procedural framework can avoid the risk of inaction and reduce confusion and uncertainty where possible, accepting that this may not always be possible. Thirdly, I argue that a pluralistic, non-idealised outcome-focused approach provides a stronger foundation for action, while seeking to minimise harms and unintended outcomes, and maximise responsibility for the outcomes of action. Through action, connection, and interconnection this approach explains how incremental moral duties can arise in the performance of assistance that can mark the beginning of special relationships rather than the complete fulfilment of a moral duty.

Moral Status Moral Duty Situate Context Moral Standing Categorical Imperative
These keywords were added by machine and not by the authors. This process is experimental and the keywords may be updated as the learning algorithm improves.
This is a preview of subscription content, log in to check access.