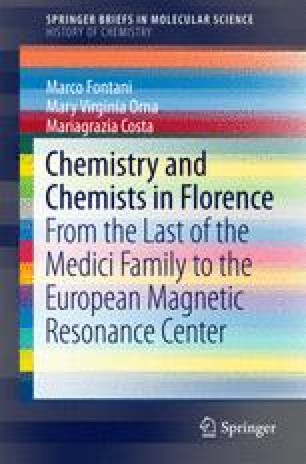 Chemistry and Chemists in Florence pp 25-84 | Cite as

Another cornerstone of higher education in Florence emerged in 1859 when the Provisional Government of Tuscany, led by Baron Bettino Ricasoli, established the Institute of Practical Higher Studies and Specialization on 22 December naming Marquis Gino Capponi (1792–1876) as Superintendent. The mission of the Institute was twofold: professional training and specialization. The aim of this institution was to make Florence the capital of Italian culture in anticipation of national independence; so the Institute had to have Chairs of disciplines that would be important to the new nation, held by the most competent and professional educators. Supporters of the Institute were intent upon its achieving constant dialogue between the “Sciences of the Spirit” and the “Sciences of Nature.” To accomplish this, four schools were established: Philology and Philosophy, Forensic Science, Natural Sciences, and Medicine and Surgery, aimed at educating young people beyond the limits of university studies and encouraging them in true creativity.

Schiff Base Nobel Prize Italian Chemical Nobel Laureate Cyanogen Bromide
These keywords were added by machine and not by the authors. This process is experimental and the keywords may be updated as the learning algorithm improves.
This is a preview of subscription content, log in to check access.