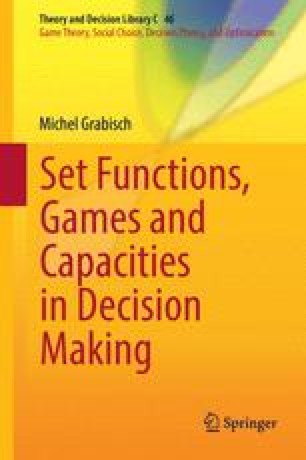 The last chapter presents an application of a particular class of normalized capacities (belief and plausibility measures) to the representation of uncertainty. This class has very specific properties and can be obtained through very different approaches (upper and lower probabilities, evidence theory and random sets, at least). Moreover, there exists a subclass of particular interest, the class of possibility and necessity measures, which has lead to a whole theory, called “possibility theory”. For these reasons, belief and plausibility measures (or functions, as we call them in this chapter) occupy a central position among set functions, and similarly to Chap.  2, we give here an in-depth study of their properties, providing nearly all proofs of the results. Viewed as an alternative tool of modeling uncertainty, belief and plausibility functions are close to probability measures in their usage. This is why the topic of defining a conditional belief or plausibility measure/function is of central importance. Section 7.5 is devoted to this topic, which happens to be complex since several definitions are possible, all extending classical conditional probabilities. The chapter ends with a generalization of belief functions, defined on lattices (Sect. 7.8).

Mass Distribution Belief Function Possibility Distribution Evidence Theory Possibility Theory
These keywords were added by machine and not by the authors. This process is experimental and the keywords may be updated as the learning algorithm improves.
This is a preview of subscription content, log in to check access.