The Shadow of Black Holes 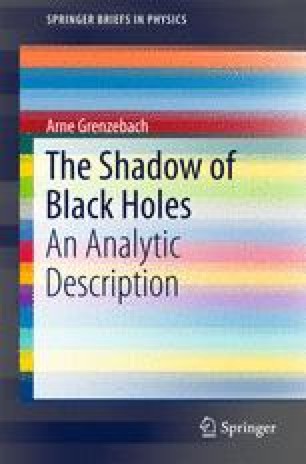 This chapter contains a summary of important properties of the shadow of black holes and an outlook on upcoming extension.

Black Hole Photon Region Naked Singularity Kerr-Newman Case Cosmological Horizon
These keywords were added by machine and not by the authors. This process is experimental and the keywords may be updated as the learning algorithm improves.
Download chapter PDF

Based on a detailed analysis of the Plebański–Demiański metric of black hole space-times, we have derived analytical formulas for the photon regions and for the shadow of a black hole.1 They are valid for all Plebański–Demiański space-times although the involved metric functions have different meanings. In general, the space-times are not asymptotically flat and may have a cosmological horizon. Therefore, one cannot restrict to observers at infinity as it is done in many articles by other authors on shadows of black holes. Our formalism allows for observers at any Boyer–Lindquist coordinates in the domain of outer communication.

It turns out that the shape of the black hole’s shadow is mostly determined by the spin of the black hole where the resulting asymmetric deformation can be understood as a dragging effect of the rotation. But it is unexpected that besides the charge or the cosmological constant also the NUT charge apparently only affects the size of the shadow. Since a gravitomagnetic NUT charge causes a North–South violation of the symmetry of the photon region, which determines the boundary of the shadow, one would expect an influence on the symmetry of the shadow. However, the calculations show that the shadow seen by the standard observer stays symmetric with respect to a horizontal axis, even for non-vanishing NUT parameter and for an observer off the equatorial plane. Although the acceleration parameter does not destroy the symmetry of the shadow with respect to a horizontal axis, it does have such an effect on the photon region, the ergosphere and the causality violating region.

It is possible to consider observers in different states of motion. For a radial motion, the shadow changes according to Penrose’s aberration formula that is easily deduced from my formulas. For other states of motion, the shadow is shifted or scaled. The shadow stays symmetric with respect to a horizontal axis as long as the observer does not move in \(\vartheta \) direction. Indeed, the aberrational influence for attempts of observing a galactic black hole is small because of small relative velocities.

Due to the cosmic censorship hypothesis (Penrose 2002), we have restricted ourselves to black-hole space-times, but a large part is valid for naked singularities, too. In particular, the characterization of the photon region by inequality ( 3.7) is true in general. A major difference is the fact that there is no domain of outer communication in case of a naked singularity. If present, the possible observer positions are restricted only by a cosmological horizon. The shadow of a naked singularity is drastically different from the shadow of a black hole, as was demonstrated by de Vries (2000) for the Kerr–Newman case. While for a black hole the shadow is two-dimensional (an area on the sky, bounded by a closed curve), for a naked singularity the shadow is one-dimensional (an arc on the sky).

Another obvious way to continue this work is guided by the question whether it is possible to reveal black hole parameters from an observed shadow of a black hole. For this, my analytical formulas for the boundary curve of the shadow seem to be a promising tool since they are valid for a general class of space-times. If also the aberrational effect is taken into account, the boundary curve depends on the observer’s velocity and the parameters of the space-time (spin, electric and magnetic charge, NUT charge, the Manko–Ruiz parameter, acceleration and the cosmological constant; the mass m gives an overall scale). To make ones life easier, it is enough to start with the Kerr–Newman space-time as suggested by the no-hair theorem. The parameter reconstruction is one of the main goals of the BlackHoleCam or the Event Horizon Telescope projects.

Our analytic way to describe the boundary curve of the shadow is highly idealized since no effects of matter can be modeled. This has to be done with ray-tracing methods to achieve realistic images. The big advantage of our formulas is that they image the shadow of very general classes of black hole metrics. The many singularities that ray-tracing must overcome are overcome naturally. This provides a powerful tool for testing the shadow from Sgr A* or M87 against alternative models of black holes, as well as alternative theories of gravity.