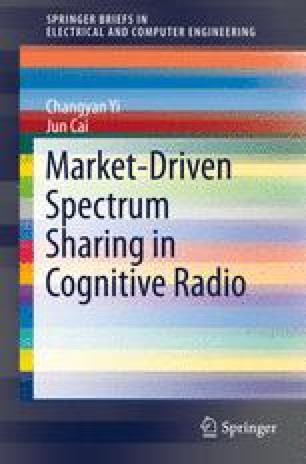 Radio spectrum scarcity has become a critical limitation for the development of new wireless equipments, applications, and services. To alleviate such burden, more and more researches have been conducted for improving the spectrum utilization efficiency. In this brief, we focused on one of the most promising technologies, i.e. CR-based dynamic spectrum sharing, from the view of engineering economics. In Chap. 1, the architecture of CR networks and the characteristics of traditional DSA were first presented. Then, the framework of market-driven spectrum sharing was illustrated. As mathematical backgrounds, Chap. 2 reviewed the fundamentals of mechanism design theory, and described some well-known existing mechanisms, such as SPSB, VCG and LOS. After that, three featured spectrum sharing mechanisms were demonstrated in detail. Specifically, a recall-based spectrum auction mechanism was studied in Chap. 3, where a single-seller spectrum sharing model with dynamic spectrum availabilities was considered. In Chap. 4, a two-stage spectrum sharing framework was modeled, in which a multi-seller recall-based spectrum sharing problem was analyzed by a first-stage combinatorial auction mechanism along with a second-stage Stackelberg pricing game. Chapter 5 introduced an online spectrum allocation mechanism, which aims to the scenarios with both PUs and SUs declaring their spectrum usage requests on the fly. In addition, theoretical analyses and numerical results were provided in all these chapters to prove the feasibility, efficiency, and superiority of all aforementioned designs.

Efficient Spectrum Utilization Scarce Radio Spectrum Mechanism Design Theory Aforementioned Design Auction Mechanism
These keywords were added by machine and not by the authors. This process is experimental and the keywords may be updated as the learning algorithm improves.
This is a preview of subscription content, log in to check access.