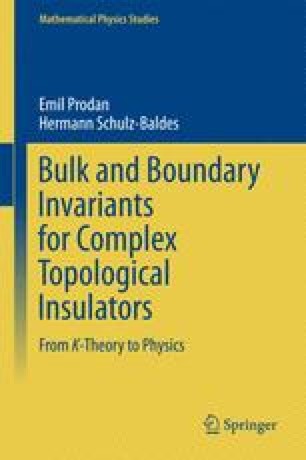 This chapter presents various applications to solid state physics of the mathematical results obtained in the earlier chapters. The topological invariants are connected to linear and nonlinear transport coefficients and the expected physical effects are discussed in depth for class A and class AIII of topological insulators, in several space dimensions. Then we follow with an in depth analysis of orbital polarization and magneto-electric effects, and virtual topological insulators are taken up as a more recent development. As a further novel implication, it is shown that the surface states of approximately chiral systems may exhibit a quantum Hall effect with a Hall conductance imposed by the bulk invariants.

Chiral Symmetry Topological Insulator Quantum Hall Effect Orbital Polarization Chern Number
These keywords were added by machine and not by the authors. This process is experimental and the keywords may be updated as the learning algorithm improves.
This is a preview of subscription content, log in to check access.