Regenerative Medicine - from Protocol to Patient 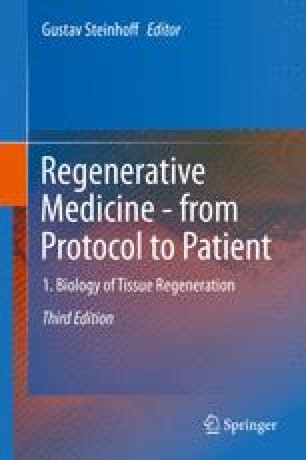 Regenerative Medicine - from Protocol to Patient pp 223-247 | Cite as

Organ and Appendage Regeneration in the Axolotl

Regeneration is a remarkable feat of biology. It requires an organ system – most often consisting of many different cell types – to stop its specialized function and step back in ontological time. Regeneration overcomes the general understanding that development is a one-way street. We now know that there is great variability in regeneration capacity across phylogeny, likely because animals need to have some mechanism in place to survive injuries or diseases that it will encounter. Some animals, including humans, meet this need by closing the wound as quickly as possible and making due with the deficit. Other animals, such as the axolotl described here, instead regenerate the damaged or missing tissue.

Ambystoma mexicanum, commonly known as the axolotl, is uncommon among vertebrates because of its superior regenerative abilities. References of their unique abilities cross from the scientific to the main stream media, but they are also useful animals for understanding the mechanisms that regulate regeneration. As axolotls are tetrapods that can breed all year-round and accept grafts between adults, they possess some major advantages that make them uniquely suited to be animal models of regeneration. In terms of appendage regeneration, there is currently a lack of animal models for complex regeneration. The two dominant models are zebrafish, which regenerate caudal fins throughout life, and Xenopus frogs, which can regenerate limbs and tails early in development. Although these systems have provided important insights into vertebrate regeneration, the axolotl limb is particularly well suited to study adult appendage regeneration. Axolotls are capable of regenerating complete adult limbs that are morphologically similar to human limbs using endochondral ossification. In contrast, the zebrafish dermal caudal fin skeleton has no mammalian counterpart, and the fin skeleton regenerates by direct ossification from mature osteocytes (Sousa et al. Development, 138(18):3897–3905, 2011; Knopf et al. Dev Cell 20(5):713–724, 2011). Xenopus regenerates early in development, but its ability to regenerate patterned skeletal structures is absent in adulthood. Therefore, the axolotl is among the best vertebrate models for adult joint regeneration.

Here, we will highlight what is known about the axolotl’s regenerative abilities and discuss the mechanisms that regulate regeneration of each organ system. It is generally assumed that the axolotl has the ability to regenerate most if not all of its tissues, but a survey of tissue regeneration has yet to be performed in this animal model. We will focus upon the regenerative capacity of the axolotl, but it is necessary to include examples of regeneration in the newt, Xenopus laevis, and zebrafish because in some aspect these species have been studied in more detail than in the axolotl model.