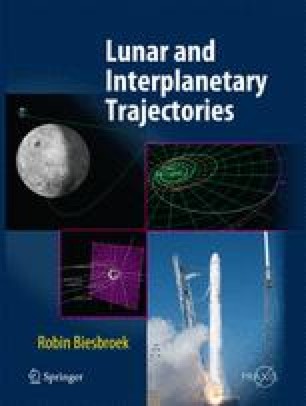 Though all chapters have discussed how to get from Earth to a planet, and even how to enter an operational orbit around a planet, the type of operational orbit has not been discussed yet. The operational orbit selection depends on many factors, such as ground coverage for scientific missions, coverage to a lander for relay satellites, or the need for certain Sun illuminations due to constraints acting on the power sub-system. There are different types of planetary orbits, and these will be discussed in this chapter.

Orbit Period Lunar Surface Orbit Plane Solar Panel Libration Point
These keywords were added by machine and not by the authors. This process is experimental and the keywords may be updated as the learning algorithm improves.
This is a preview of subscription content, log in to check access.