Genetic Diversity and Erosion in Plants 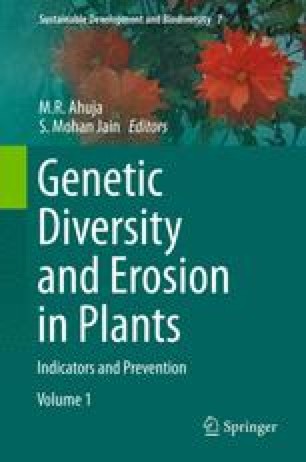 Genetic Diversity and Erosion in Plants pp 25-53 | Cite as

This chapter surveys the conceptual basis of indicators of genetic diversity, genetic erosion, and genetic vulnerability. These are summary measures of genetic diversity in cultivated plants and their wild relatives that guide decisions, monitor progress, and warn of emerging issues of genetic resources for resilient agricultural production. Such indicators measure the genetic diversity currently present in agricultural populations on farm and held in germplasm collections, and aim to detect genetic erosion, or serious loss of diversity in time, and to warn of vulnerability due to adverse deployment of genetic diversity in space. While diversity itself encompasses many concepts, richness diversity—the number of different kinds of individuals regardless of their frequencies—is the most important theme, followed by evenness diversity—how similar the frequencies of the different variants are. Many variables are plausible as indicators of diversity. The more practical are based on number of individuals or area occupied in situ and on the number of accessions and the number of genebanks ex situ. Genetic erosion is measurable as the proportion of richness of genetic diversity no longer existing in current populations, when compared with the crop a decade previously or predicted to be lost in the next decade without remedial action. Genetic vulnerability is inversely related to richness diversity that is present locally, particularly if it is known to possess adaptation to exotic or new mutant pathotypes or insect strains or environments. Census information forms the primary data. For cultivated species, these data are based on the farmer’s unit of diversity management, most often their named varieties, their number, relative frequencies and divergence over various units of spatial and temporal scale. For wild species, the analogous units of diversity are the lowest recognized (e.g. subspecies, morphological types, ecotypes). Census data should be supplemented and validated using more direct assays at the DNA level with molecular techniques in carefully constructed samples.

The measurement of diversity requires an understanding of the different concepts or meanings that belong to the statement: “Population A is more diverse that population B”. One concept is that population A harbors more recognizable, distinct types than does population B. This we call richness diversity and refers to the number of different kinds of individuals regardless of their frequencies. Another related concept, evenness diversity, refers to the similarity in frequencies of the types in population A compared with population B. Low evenness indicates the dominance by one or two types. If the frequencies of the different types in A are very similar, the variance in their frequency is lower compared with that in B.

The measure of richness is, straightforwardly, the number (k; k = 1, 2, 3 …) of types in a sample. Its dependence on sample size can be corrected using resampling techniques. Evenness, on the other hand, is less obvious. A standard, conceptual parameter for measuring variation in biology is the coefficient of variation of the frequencies of types, where the coefficient of variation (CV[p i]) is the square root of the variance divided by the mean frequency (p = 1/k). If all the types in the population are equally frequent, then the variance of their frequencies is very low or zero, and the evenness diversity would be high. The evenness index commonly used in genetics is Nei’s (h = 1−Σp i 2 ; 0 ≤ h ≤ 1.0) is also called the genetic diversity index. It is the complement of the Simpson index of dominance (D = 1−h) in ecology. The symbol h signifies the close parallel with expected heterozygosity in population genetics. Despite these potentially confusing names, h is perhaps the most understandable measure of evenness diversity. This is because h is the average chance that two gametes drawn at random from the population will differ at a locus.

Because of close parallel with expected heterozygosity for a single gene polymorphism in a random-mating population, we use the symbol h. It is known that the evenness index (h) is a simple function of the variance evenness and richness measures:
$$h = 1 - \left\{ {1 + {\text{CV}}^{2} \left[ p \right]} \right\}/k$$
This formula shows that this evenness index (h) increases as the richness (k) increases, and as the coefficient of variation of the frequency of types decreases. Yet, in general, h is more a measure of evenness than it is of richness. Numerically, h is largely determined by the frequency of the most frequent, or dominant type. (Hence the Simpson Index is sometimes called the dominance index.)

There are in theory other additional concepts and measures of genetic diversity (Brown and Weir 1983; Brown and Hodgkin 2007) that could serve as indicators. However, the two measures (k and h) discussed here are the most useful and readily understandable, and these two concepts are fundamental to the present discussion.