The Energy Landscape in the Republic of South Africa 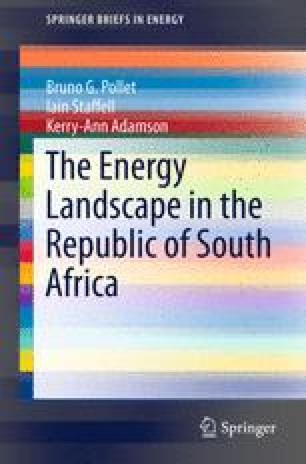 Chapter
Part of the SpringerBriefs in Energy book series (BRIEFSENERGY)

The Republic of South Africa, a BRICS middle-income developing country, faces many issues to economic growth such as: (i) energy challenges; (ii) aged and inadequate infrastructures; (iii) inefficient regulatory processes delaying inter/national and local investments; and (iv) inefficient government co-ordination, long-term planning and vision (which in turns contributes to investors’ uncertainty—although in 2013 RSA received US$8 billion in Foreign Direct Investment). According to the World Bank, RSA’s economy expanded to a mere 1.5 % in 2014, the slowest pace since the 2009 recession. In views of kick-starting the economic growth, the RSA government has recently developed a ‘9-Point Plan’ comprising simultaneous actions in key strategic areas [1].

Foreign Direct Investment Carbon Capture Energy Landscape Platinum Group Metal Energy Crisis
These keywords were added by machine and not by the authors. This process is experimental and the keywords may be updated as the learning algorithm improves.
This is a preview of subscription content, log in to check access.