Estuaries: A Lifeline of Ecosystem Services in the Western Indian Ocean 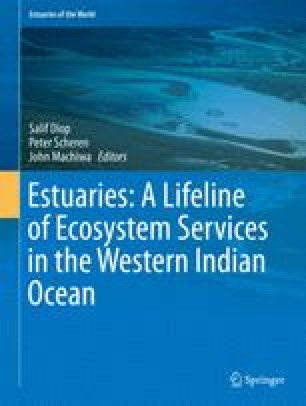 Estuaries: A Lifeline of Ecosystem Services in the Western Indian Ocean pp 289-300 | Cite as

Chapter
Part of the Estuaries of the World book series (EOTW)

The Incomati Estuary, with a length of about 30 km, a width of about 1.5 km, and an average depth of 10 m, is located in the Southeastern part of Africa, north of Maputo Bay, between the Latitudes 24o 00’S and 26o 30’S and Longitudes 29°30′ E and 33° 15′ E. The Incomati River basin as a whole has an area of 46,426 km2, of which 28,745 km2 is located in South Africa, 2,786 km2 in Swaziland and 14,856 km2 in Mozambique. There are several dams upstream, mainly used to supply irrigation water. The river discharge is 200–400 m3 s−1, corresponding to a river discharge of about 700–1000 Mm3, with peak and lower flows during the wet season (November to March) and dry season or winter (June-August), respectively. The morphology of the estuary is characterized by meanders, islands and sand banks, fringed by mangroves. The tides are semidiurnal, with amplitudes varying from 0.5 to 3.5 m during the spring and neap tides, respectively. The predominant winds are trade winds, with average speed of 4 m s−1. The estuary plays an important ecological role and sustains important socioeconomic activities. It is a nursery ground for important fisheries, a tourism attraction, and hosts significant agriculture and livestock activities. The sustainability of the natural resources and the activities in the estuary is threatened by the effects of the dams. The three basin countries agreed in 1991, during the “Piggs Peak Agreement,” to the maintenance of a minimum environmental flow of 2 m3 s−1, which has been violated several times by South Africa. The present work investigates how the hydrodynamics of the estuary, which controls most of the ecological processes, is influenced by the river discharges. Tides, currents and water masses in the estuary are described, based on historical hydrodynamic data. A simple 1-D, depth and width integrated, tidal hydrodynamic model forced by the observed tides at the mouth, was used to reproduce the hydrodynamics of the estuary. In addition, an analytical solution of the advection–diffusion of salt is applied to reproduce the salt intrusion. The model was then used to determine the extent of salt intrusion as a function of the river discharge, and so used to estimate the minimum environmental flow required for a healthy estuarine ecosystem in Incomati. The results indicated the estuary shifts, from a stratified condition in the wet season to vertically-mixed in the dry season. The tidal wave takes about 30 minutes to propagate from the mouth to the head of the estuary. The current varied between 0 and 1.2 m s−1, mostly driven by tides. The density driven circulation is weak, with a density gradient of about 0.10 kg m−3 per km, and a density-driven velocity of about 0.04 m s−1. The hydrodynamic model applied explains 87% of the current observed in the estuary, meaning the currents were mostly tidal driven, with the remaining 13% attributed to other factors such as density gradient and winds. The minimum recommended river flow required to prevent the intrusion of salt water to a distance 20 km upstream is 20 m3 s−1, against the 2 m3 s−1 value in the Piggs Peak Agreement. The results of this study may contribute to a better understanding of the dynamics of the ecosystems in the Incomati Estuary, and in the management of the river for the health of the downstream ecosystems.

We would like to thank Dr. Regina Folorunsho, Mrs Faith Bowers, Professor D.G. Bowers and an anonymous reviewer for the constructive remarks and suggestions, which significantly improved the quality of the manuscript.

Cite this chapter as:
Hoguane A.M., Antonio M.H.P. (2016) The Hydrodynamics of the Incomati Estuary – An Alternative Approach to Estimate the Minimum Environmental Flow. In: Diop S., Scheren P., Ferdinand Machiwa J. (eds) Estuaries: A Lifeline of Ecosystem Services in the Western Indian Ocean. Estuaries of the World. Springer, Cham. https://doi.org/10.1007/978-3-319-25370-1_18