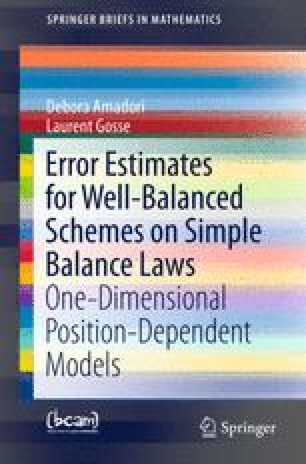 In this chapter we introduce the topic of the book, namely the class of partial differential equations on which it is focused and an Outline of the presented material.

Even if post-WWII supersonic aircrafts development considerably stimulated both the understanding and practical approximation schemes for inviscid fluid mechanics equations, multidimensional systems of conservation laws [9], the decision to massively invest into the computational treatment of Euler equations appears to be a bit more recent, roughly speaking the 80s, when the shortcomings of popular widely-used models based on potential flow hypotheses were revealed during the so-called “Stockholm Olympics”, see [29]. A previous success for (hypersonic) computational fluid dynamics was the correct design of the thermal shield on the Apollo spatial vehicles for the atmosphere reentry phase, based on a multi-D extension of the Godunov scheme produced in 1959 for inviscid Euler equations, [14, 35]. Oppositely, during the 80s, the Airbus 320 transonic airfoils were still designed by means of a potential flow approximation, i.e. a scalar equation for which general conservation of mass, momentum and energy is not completely ensured.

Obviously, an heavy price inherent to switching from the computational simulation of an elementary, possibly fitted, model to the handling of a considerably more complex system of equations is the design of reliable, realizable and efficient numerical algorithms. Presently, multidimensional inviscid Euler equations appear to be replete of difficulty of all kinds, like the mathematical ones in order to give some rigorous sense to weak discontinuous solutions containing shock waves, [5, 26], but also some unexpected ones, like several non-uniqueness and ill-posedness phenomena recently established for 2D inviscid systems containing vorticity , [8, 12]. It came with no surprise that fine-scale structures concomitant with vorticity developing in the solution may result into a destabilizing factor in numerical computations; less expected was the fact that it overcomes the stabilizing effect of entropy dissipation, even at the mathematical level of continuous equations. Paradoxically, some authors begin to take a step back and advocate some potential flow models: see [11].

Besides, left apart ill-posedness pathologies, numerical issues may pop up immediately when one plans to compute multidimensional flows endowed with discontinuous shock waves by means of finite-differences on a fixed grid: P.L. Roe calls the example of a static shear flow not aligned with the grid (i.e. an oblique contact discontinuity) the “case against upwinding”: see [19, p. 345] and Fig.  6.7. Examples of this kind sparkled many developments and algorithmic advances, some of which were consigned in the book [20], see also [36]. Even if many pathologies still remain in existing algorithms, some signs suggest that algorithmic innovation slowed down so much that it practically came to a stop, [31], the main driving force behind recent computational progress being mostly an increase in CPU power.

Enormous difficulties coming from the multidimensional characters of compressible flows [13] can be somewhat circumvented by following Godunov’s ideas, namely narrowing the scope only to one-dimensional models within a dimensional-splitting perspective (see e.g. [17, 24]). Necessity knows no law. A salient feature in one-dimensional inviscid models is the availability of an efficient tool for the resolution of discontinuities, the Riemann problem and its “simple waves” endowed with neat directions of propagation; such a building-block gave rises to many time-marching approximation procedures, which all rely on resolving discontinuities (possibly induced through wave interactions ) by correctly distinguishing the nature of left- and right-going disturbances. A piecewise-constant approximation of initial data furnishes a convenient input allowing to set up many Riemann-based algorithms, leading to significant theoretical stability results, too [5]. Of course, one should always keep in mind that, apart from specific problems, one-dimensional models are a drastic simplification which cannot be thought as truly reflecting the complexity of certain multidimensional inviscid flows [10, 16, 27, 30, 40].

Even in such a simplified context, both theoretical and computational issues remain: left aside the scalar conservation law for which a satisfying theory was proposed by Kružkov [23] and the so-called Temple class systems [6], general 1D strictly hyperbolic systems of conservation laws are usually subject to restrictive smallness assumptions on their (initial, boundary) data [39]. In the realm of such a \(L^1\)-stability theory of (small) \({\textit{BV}}\) entropy solutions, one still faces several important obstructions when considering numerical approximation processes, except for a few notable cases, like Godunov’s scheme for Temple class systems [7] (in contrast with [2, 3]), or the wavefront tracking algorithm [28], a convenient convergence theory of widely-used schemes is still not available. Worse, obstacles appear to be not just technical, as some quite practical examples were produced, displaying for instance wave-curve deformations as a result of numerical viscosity [1, 22, 37].

So far, only homogeneous models were tacitly considered, that is to say, models endowed with neither forcing nor dissipation, for which global conservation exactly holds along time. Needless to say, a good description of realistic problems often involves supplementary, lower-order terms, usually referred to as source terms, likely to restrict, or at least perturb a bit more existing stability theories. Two main classes of source terms can be distinguished:

Numerical techniques for both these categories are intrinsically different: uniform in space, dissipative terms are well handled by operator-splitting in time algorithms, consisting essentially in alternating the treatment of the homogeneous equations and the ordinary differential system resulting of the presence of the source (which acts more like a sink ) [17]. Oppositely, position-dependent, bounded-extent source terms lead, in large times, to a scattering (i.e. non-interacting) state where homogeneous hyperbolic waves propagate far away, but a steady-state wave, resulting from a delicate balancing of convection forces and sources, stands close to the origin. Such a balance is usually not correctly reproduced by a time-splitting strategy, as was already well understood in the 80s [18, 34]. A scattering mechanism is present in homogeneous systems of conservation laws: by strict hyperbolicity, the solution decays toward a set of non-interacting waves. This set of waves identifies with the Riemann problem at infinity, obtained by a “zoom-out” rescaling. Yet, in presence of a bounded extent source, such a rescaling wipes off everything except for a Dirac measure in zero inside which all the effects are concentrated. A S-matrix relates incoming and outgoing hyperbolic waves, locally scattered by a “Dirac source” [13].

1.2 This Book in a Nutshell

This book is mostly concerned with quantifying the accuracy of specific numerical approximations of 1D systems of balance laws endowed with position-dependent, possibly accretive source terms, hence decaying in large time onto a scattering state involving a stationary wave. These approximations follow Glimm’s canvas, namely reducing a position-dependent source term to a countable collection of “local scattering centers” by means of Dirac measures (for instance, located at the edges of computational cells in a Cartesian mesh), and proceeding by iteratively solving all the resulting Riemann problems, but this time, including the “standing wave ” (in the terminology of [21]) which results of the “Dirac source scattering ”. Within a Godunov scheme, this procedure is mostly referred to as well-balanced scheme [15] whereas in the context of homogenization of periodically forced scalar laws, one speaks more willingly about a generalized Glimm scheme [38]. During the last decade, such a numerical strategy was very successful on practical computations for shallow water equations endowed with steep topography source terms (see [4] and ( 2.11); hence the natural question “is there a rigorous mathematical explanation for this class of schemes outperforming the standard ones ?” to which the forthcoming chapters aim at (partly) answer in a unified, self-contained manner.

Basically, our conclusions can be stated in a straightforward fashion as follows: