Migration in an Era of Restriction and Recession 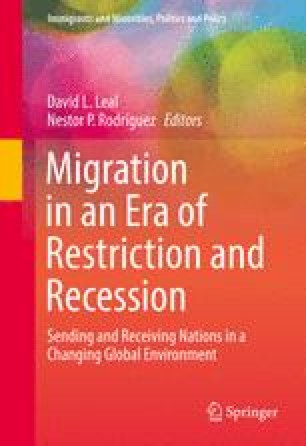 Chapter
Part of the Immigrants and Minorities, Politics and Policy book series (IMPP)

After the September 11 attacks in 2001, some Islamic Mosques were vandalized, hate crimes against Muslims increased, thousands of Muslim men were placed into deportation proceedings, and civil rights for Middle Eastern and Muslim Americans were violated. Moreover, a majority of anti-terrorist policies and initiatives executed during the first year after 9/11 targeted Arabs and Muslims. Much like other Middle Eastern immigrants since 9/11, Iranians have been victims of discrimination, prejudice, hate crimes, and racial profiling because of their national origin and the political tension between Iran and the USA. In response to the legal changes, discriminatory immigration practices, and violation of civil rights after 9/11, instead of hiding, second-generation Iranian advocacy groups and organizations responded to this backlash through political activism and legal challenges. This chapter describes the various ways young second-generation Iranians sought to become politically engaged to protect their civil liberties, receive legal assistance for immigration issues, and oppose discriminatory policies. Since then, Iranian immigrants matured politically and gained a new perspective on political processes in the USA. Whereas first-generation Iranians remain politically divided, preoccupied with political events in Iran, and in search of support for their political causes, second-generation Iranians are gradually socializing into American political institutions and are working to enter mainstream politics in the USA. They are not only working to protect the civil rights of naturalized Iranians in the USA but also to reclaim, retain, and redefine the Iranian ethnicity that has been under attack for the last 35 years.

American Community Survey Hate Crime Political Mobilization Class Action Lawsuit Iranian Immigrant
These keywords were added by machine and not by the authors. This process is experimental and the keywords may be updated as the learning algorithm improves.
This is a preview of subscription content, log in to check access.

Cite this chapter as:
Mobasher M.M. (2016) Immigration Restrictions and Political Mobilization Among Second-Generation Iranian Immigrants in the USA. In: Leal D., Rodríguez N. (eds) Migration in an Era of Restriction and Recession. Immigrants and Minorities, Politics and Policy. Springer, Cham. https://doi.org/10.1007/978-3-319-24445-7_8