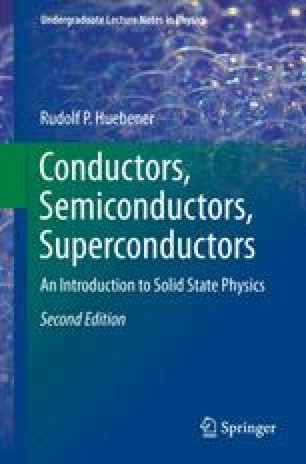 Less Can Be More: Semiconductors

If the electronic band structure allows the thermal excitation of electrons from the top of a completely filled valence band to the bottom of an empty conduction band, we deal with a semiconductor, such as germanium or silicon, or the compound semiconductors consisting of elements of the third and the fifth column of the Periodic Table (or of the second and the sixth column). The carefully controlled doping with donors and acceptors yields materials, which are extremely useful for many electronic applications. The metal-semiconductor contact and the rectification effect of the p–n junction are discussed. After its invention in 1947, the transistor underwent many evolutionary stages during its miniaturization. Our discussion includes photovoltaics, the light-emitting diode (LED), and the semiconductor laser.

Conduction Band Valence Band Light Emit Diode Semiconductor Laser Light Quantum
These keywords were added by machine and not by the authors. This process is experimental and the keywords may be updated as the learning algorithm improves.
This is a preview of subscription content, log in to check access.