Bichitra: The Making of an Online Tagore Variorum 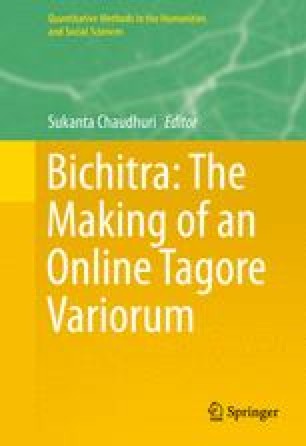 Bichitra: The Making of an Online Tagore Variorum pp 13-20 | Cite as

This chapter starts by outlining the status of the Bengali language in terms of demography and world culture. It then describes the Bengali alphabet and script, indicating the special problems they create for electronic fonts. Bengali vowels are usually not written in full, but indicated by vowel markers attached to the consonants. These vowel markers phonetically follow the consonant but are sometimes written before, above or under it. Most crucially, two or more letters can be combined in a single conjunct glyph, which may look very different from its constituent letters, and also vary from font to font in traditional print. These factors make the Bengali keyboard more cumbersome than the Roman. The most serviceable keyboard software available is Avro, the program used for Bichitra. Most importantly, the complexities of the Bengali script make Optical Character Recognition a virtually impossible proposition when dealing with such a wide range of material in so many print fonts, not to mention manuscript. Manual transcription is the only solution. This chapter describes the way such transcription was carried out by the project team.

Text File Optical Character Recognition Official Language Writing System Digital Resource
These keywords were added by machine and not by the authors. This process is experimental and the keywords may be updated as the learning algorithm improves.
This is a preview of subscription content, log in to check access.