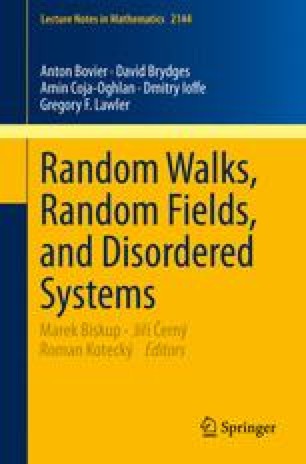 From Spin Glasses to Branching Brownian Motion—and Back?

Brownian Motion Point Process Gaussian Process Gibbs Measure Brownian Bridge
These keywords were added by machine and not by the authors. This process is experimental and the keywords may be updated as the learning algorithm improves.
This is a preview of subscription content, log in to check access.

I am deeply grateful to my collaborators on the matters of these lectures, Louis-Pierre Arguin, Nicola Kistler, Irina Kurkova, and, most recently, Lisa Hartung. They did the bulk of the work, and without them none this would have been achieved. I also thank Jiří Černý, Lisa Hartung, and an anonymous referee for pointing out various mistakes and suggesting improvement. I thank Marek Biskup, Jiří Černý, and Roman Kotecký for organising the excellent school in Prague and for the opportunity to present these lectures there.

This work is partially supported through the German Research Foundation in the Collaborative Research Center 1060 “The Mathematics of Emergent Effects”, the Priority Programme 1590 “Probabilistic Structures in Evolution”, the Hausdorff Center for Mathematics (HCM), and the Cluster of Excellence “ImmunoSensation” at Bonn University.

This looks very fancy, but in reality things are quite down-to-earth:

As a consequence we can further restrict the criteria to be verified for N to be a Point process. In particular, we can restrict the class of F’s for which N(⋅ , F) need to be measurable to bounded rectangles.

In the next theorem we will assert the existence of a Poisson point process with any desired intensity measure. In the proof we will give an explicit construction of such a process.

The following properties of vague convergence are useful.

Having established the space of \(\sigma\)-finite measures as a complete, separable metric space, we can think of weak convergence of probability measures on this space just as if we were working on an Euclidean space.

An important convergence criterion is given by the following theorem (see [24, Chap. 11]).