The Hagendorf-Pleystein Province: the Center of Pegmatites in an Ensialic Orogen 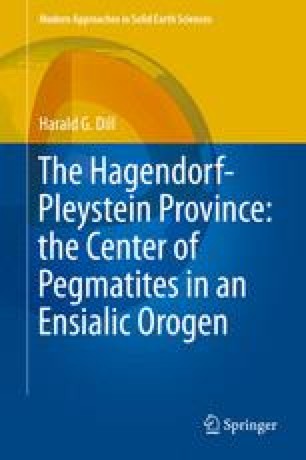 The Hagendorf-Pleystein Province: the Center of Pegmatites in an Ensialic Orogen pp 403-425 | Cite as

Pegmatites are representatives of a unique lithology, in view of their mega-crystals and colorful minerals spread across in the felsic groundmass, but on the other hand they are not unique in terms of the lithological processes, involving magmatic, metamorphic, hydrothermal and sedimentary processes, if by common consensus we accept weathering and denudation as part of the sedimentary processes. Metapegmatites are restricted to the allochthonous units of the ensialic orogen. A transitional facies with an extraordinary concentration of Nb-Ta together with Be can be correlated with two crustal highs of a high-velocity zone indicating a lower crustal thermal high underneath. Unlike the metapegmatites, which are pre-kinematic, the younger pegmatitic mobilizates, called pegmatoids, were emplaced late kinematically with only minor or no textural adjustment to the stress-strain relations in the NE Bavarian basement rocks. One can find this type of felsic mobilizates in the allochthonous units. The built-up, alteration and destruction of pegmatites and aplites in the HPPP is a complex process.

Stage 1: Metamorpho-tectonic syn- to late kinematic mobilization is similar to the processes known from the nappe emplacement with its numerous pegmatoids. The transition from lens-shaped and schlieren of pegmatoids to pegmatites s.str. suggests that these melts were very mobile, and separated gradually from their site of formation through selective separation such as filter-pressing and seismic-pumping along with thrustal motion. Intracrustal and subcrustal processes of element mobilization have acted in the same direction by providing heat and mobilizing elements.

Stage 2: Late kinematic (to postkinematic) subcrustal magmatic mobilization was in full swing as the deformational processes of Variscan Orogeny waned. Metagabbros and lamprophyres are the only magmatic rocks that can be held accountable for this early mobilization. Accumulation of rare elements started off with beryllium and continued into zinc.

Stage 3: Postkinematic subcrustal magmatic mobilization prevailing over late kinematic one culminated in the dissemination of “nigrine” confined to the country rocks of the pegmatites.

Stage 4a and b: At the end of stage-4b postkinematic mobilization all mineral assemblages and element association had been completely emplaced in the HPPP that enable us to categorize the majority of pegmatites and aplites of the central zone of the HPPP as (Be-Zn)-Li-Nb-P pegmatites (stock-like and tabular) and aplites (tabular). A characteristic “chimney-like” thermal cell within the pegmatite system was of ore control and fostered the fluid migration and accumulation of the rare metals which used to be concentrated at the contact between the massive quartz underneath and the zone of quartz fragments above. The “chimney” has much in common with the Sn-bearing siliceous greisen deposits in the Saxo-Thuringian Zone. This structural similarities stimulate the idea that between siliceous greisen deposits at rather shallow depth and quartzose pegmatites at a deeper level is no real difference by quality but only by quantity. The accommodation space was provided by a fundamental change in the strain vectors from lateral to vertical. From the SW-NE trending Luhe Line to the granites along the SW-NE striking Fichtelgebirge-Erzgebirge Anticline in the Saxo-Thuringian Zone a gradual change in the mineralogy can be observed.

Stages 4c and 4d: Postkinematic mobilization and contact metasomatic processes along the margin with the metasedimentary rocks have mainly to do with the close interdigitating of metamorphic country rocks and felsic mobilizates.

Stages 4e, 4f and 4g: The stages are representative of the postkinematic mobilization and autometasomatism with autometasomatic retrograde reactions.

Stages 5a and 5b: Epithermal mineralization I is related to shallow intrusions of two-mica granites. A decisive criterion for its denomination in this case has been the level of mineral deposition, which is assumed to be shallower than the level of formation of stage 4 taking into account that the paleohydraulic conditions controlled by the morphology of the late Paleozoic landscape.

Stage 5d and 5e: Epithermal autohydrothermal alteration I gave rise to a true hypogene kaolinization which affected the apical parts of the “Older” and “Younger Pegmatites”, particularly of the pegmatites and aplites of the Pleystein Trend. The ensuing secondary mineralization, that contains a lot of phosphate minerals stable only under reducing conditions, corroborates the idea of the roof rocks to have been still intact prior to the onset of the secondary mineralization.

Stages 6: Early (auto)hydrothermal mineralization gave rise to a wide range of phosphate minerals which were precipitated in vugs and cavities, while others line fracture planes. Mn-bearing phosphates point to Mn as a marker element of stage 6.

Stages 7: Late hydrothermal mineralization (autohydrothermal to externally driven) appeared during the uplift of the pegmatite system as two fluid systems started to mix and another so-called epithermal phase (II) is looming. It is the period of time where secondary minerals absolutely unknown from outside the pegmatite system, such as schoonerite appear together with rockbridgeite. Correlation with mineral associations in the foreland hosting equivalent mineral assemblages lead to the conclusion that the secondary phosphate minerals precipitated during Post-Coniacian time.

Stage 8: Epithermal mineralization II is a topomineralic alteration. The persisting impact of the primary pegmatite mineralization conduced to a mineral suite, behaving as an alien element in the “home-grown” epigenetic mineralogy of the NE Bavarian basement and its foreland. It warrants to be called a “topomineralic” effect.

Stage 9: Supergene alteration by nature in the pegmatites of the HPPP is not kickstarted by any sudden effect but is a continuum which is hard to grasp in time due to the imminent destruction of its results by concurrent denudation. The preservation potential for the pertinent minerals was raised as the uplift was moderate during periods of relative tectonic quiescence.

Stage 10: Supergene alteration by man need not be mentioned in this treatment of pegmatites. Some of these chemical compounds may still form today in some cavities or along the open pit which is flooded up to the present-day groundwater level.

The granitic pegmatites require a direct link with the host granite so as to prove their genetic relation to a parental magma. In the Fichtelgebirge, the younger suite of granites have miarolitic cavities and produced pegmatitic schlieren with rare elements such as Sn, W, Be, F, Li, Nb-Ta, B, REE, As and U contained in a variegated group of minerals.

The pseudopegmatites belong to the Variscan metallotect in the Bohemian Massif which was reactivated in the course of the Alpine Orogeny. The mineral association differs from what we have heard about along the western edge of the Bohemian Massif but the element composition is not very much at variance with the pegmatite districts in the Saxo-Thuringian and the Moldanubian Zones.

Bohemian Massif Rare Element Granitic Pegmatite Anticlinal Structure Moldanubian Zone
These keywords were added by machine and not by the authors. This process is experimental and the keywords may be updated as the learning algorithm improves.
This is a preview of subscription content, log in to check access.