Arbitration and Dispute Resolution in the Resources Sector 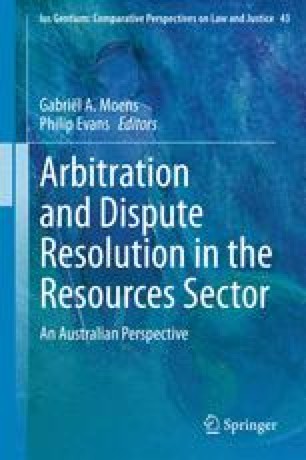 The legal regime for arbitration in Australia has undergone dramatic changes in the past five years. International arbitration matters are now governed exclusively by the International Arbitration Act 1974 (Cth) (at least for arbitration agreements entered into on or after 6 July 2010) and domestic arbitration is regulated by new uniform State and Territory legislation (except in the ACT). This paper examines key aspects of the Commonwealth legislation including the enforcement of arbitral agreements and awards under the New York Convention, the scope and application of the UNCITRAL Model Law in Australia (including the status of pre-6 July 2010 agreements) and the amendments introduced in 2010. The paper concludes with a discussion of the new principles applying to domestic arbitration.

Dispute Resolution Jute Textile Arbitral Tribunal Arbitral Process Arbitration Clause
These keywords were added by machine and not by the authors. This process is experimental and the keywords may be updated as the learning algorithm improves.
This is a preview of subscription content, log in to check access.