Gender and Land Tenure in the Context of Disaster in Asia 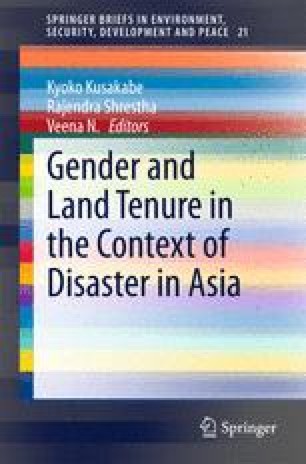 Impact of Flash Floods on a Matrilineal Society in West Sumatra, Indonesia

Following a flash flood in 2012 in a matrilineal community in Padang, West Sumatra, Indonesia, we examine the impact of the flood on women and men in their position as land owners and land users. Every disaster has a social impact that is larger than its physical impact. Land is a key resource for the livelihood in this community, and hence changes in land ownership have a long-term and deep-rooted impact on specific people who have lost or gained land rights. In matrilineal societies, women inherit land but their brothers are its guardians. Considering the matrilineal culture of the Minangkabau people, we also studied the gender and cultural sensitivity of the government and NGO responses to the disaster. The study used observation, key informant interviews, and secondary data. It showed links between gender, land tenure, and disaster in some cycles of disaster management, especially when damage was assessed and landowners identified. The study also reveals that women’s inclusion in disaster preparedness is critical to make disaster management more gender equitable.