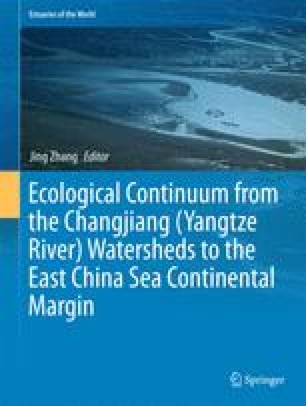 Chapter
Part of the Estuaries of the World book series (EOTW)

This chapter deals with river flow and sediment transports in the Changjiang River continuum. We first briefly introduce riverine flow and sediment discharges acting on the estuary and their variations in the past half century. There is an ongoing decrease in sediment discharge since the 1980s, which has accelerated since 2003 when the Three Gorges Dam (TGD) commenced operation. In situ flocculation of suspended sediment is detected in the freshwater river and the blackish estuary, affecting sediment transport in the system. In the estuary, changes in sediment concentrations and grain sizes are observed in response to reduced river-borne sediment load. Analysis of sediment grain sizes, suspended sediment concentration (SSC), and the clay–silt–sand content of the sediments in the estuary reveals the presence of a nearshore depocenter featured by high sediment exchange ratio off the South Passage. Numerical experiments of estuarine circulation and water age suggest that large-scale engineering works have had marked impact on the regional hydrodynamics. Overall, the river, the estuary, and the marginal sea are inherently connected through the water and sediment linkage; therefore, systematical insights on their hydro-, morpho-, and eco-dynamics are required.

Appendix A: Summary of Data Sources

The monthly and annual river discharge and sediment discharge data are from bulletins published by the Ministry of Water Resources of China each year since 2000. This data source is the most commonly used and cited in literature (see Chap.  4). However, please note that these data are accompanied by errors of up to 16 % due to sampling and measurement errors, and standard errors in statistical analysis (Wang et al. 2007). Also, regarding sediment discharge, the bed load is usually excluded from the samples and is therefore less reported and studied. Long-term grain size data are less as available in the Changjiang other than few stations such as Datong.

There are also a number of past field surveys that are described in the literature (e.g., Liu et al. 2008; Guo and He 2011). For instance, the data in Guo and He (2011) were collected during a survey conducted by drifting downstream from Yichang along the Changjiang until Xuliujing. Water samples were collected in six vertical layers for SSC and grain size analysis, and samples of bed load for grain size analysis were taken approximately every 50 km along the channel. The SSC is obtained by filtering, drying, and weighing samples, and grain sizes are measured using Coulter LS-100 instruments. Further details are available in the literature cited above.

There are extensive surveys and sampling of SSC, suspended sediment grain sizes, and bottom sediment in the Changjiang Estuary. Since the hydrodynamics and sediment transport dynamics are characterized by strong variability in seasonal (influence of river discharge and monsoonal winds) and tidal (about 12 h for semi-diurnal tides and 14 days for spring–neap tidal cycles) timescales, the discussion refers to relative timescales, whereas the longer term characteristics are presented by averaging the data over these time periods.