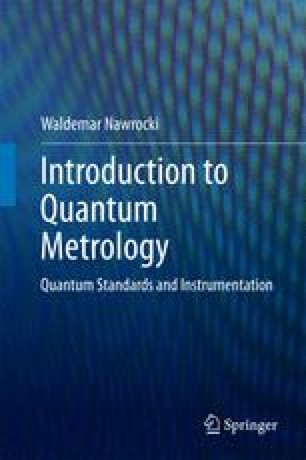 Standards and Measurements of Length

This chapter begins with a discussion of the evolution of the international definition of the meter, from that adopted by the Meter Convention in 1875 to the current definition relating the unit of length with the speed of light. We present three methods for the realization of the definition of the meter as recommended by the International Committee for Weights and Measures (CIPM). We discuss the design, operation and parameters of the iodine-stabilized helium-neon (He-Ne) laser with a wavelength of 633 nm, the most important device in metrology of length. We provide and discuss a table of sources of reference radiation other than the He-Ne laser recommended by CIPM. We also provide a brief overview of three global satellite systems for navigation and positioning, GPS, GLONASS and Galileo (under development), and point out the differences between them. Finally, we have a cursory look at three regional navigation systems, the Chinese BeiDou, the Indian IRNSS, and the Japanese QZSS.