Time Policies for a Sustainable Society 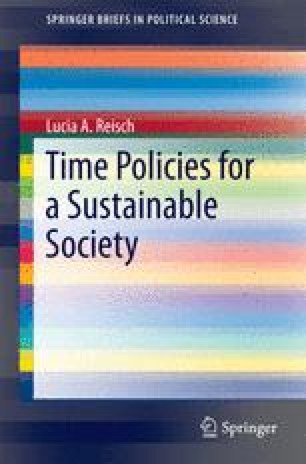 Time Policies for a Sustainable Society pp 9-31 | Cite as

Transformation of Time Regimes: Time as a Design Variable

New policies are generally formed when conditions or circumstances that have long been taken for granted change, and either new problems arise or existing problems are perceived as relevant at the sociopolitical level. The temporal organisation of society was long considered—beyond conflicts about working hours—as unproblematic and therefore as not politically viable. However, this has begun to change gradually and selectively in recent decades. In particular, in the Nordic countries (the “temporal welfare state”) and in Italy (the “temporalities of the city”—“tempi della città”), the changing role of women in the family and the labour market and, in politics, the search for the “temporal compatibility” of these roles, triggered the first time policy discussions as far back as the 1980s. Later came an awareness of the social and environmental costs of the technology-driven acceleration of life, which fundamentally changed the European time culture in the past centuries.

Life Satisfaction Ecological Footprint Hyperbolic Discount Tunnel Vision Happiness Research
These keywords were added by machine and not by the authors. This process is experimental and the keywords may be updated as the learning algorithm improves.
This is a preview of subscription content, log in to check access.