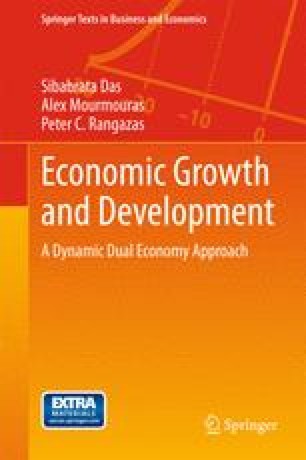 This chapter discusses the one-sector neoclassical growth model—the foundation for all the growth theory in the book. The primary focus of the chapter is growth via capital accumulation. We think of capital as man-made durable inputs to the production process. The first type of capital we include is physical capital. For our purposes, physical capital can be primarily thought of as plant and equipment that is produced in one period and then used in production in the following period. (Definitions of physical capital will vary depending on the purpose at hand. In some cases, physical capital is defined to include inventories, software, land, and other inputs that extend beyond plant and equipment.) To model production, we introduce firms, economic institutions that combine physical capital and labor to produce goods and services.

Interest Rate Human Capital Physical Capital Human Capital Investment Financial Transfer
These keywords were added by machine and not by the authors. This process is experimental and the keywords may be updated as the learning algorithm improves.
This is a preview of subscription content, log in to check access.

A: Derivative of the Value Function

In models that extend beyond two periods, it is easier to proceed by thinking of the equilibrium or market clearing condition in terms of goods rather than capital. The two ways of thinking about things are actually equivalent, but the exposition is easier if we conduct the discussion in terms of goods (see Problem 14). This is especially true if one wants to contrast the infinitely lived agent approach with the overlapping generations approach. To reduce notation, we will limit the discussion to the simple model of physical capital accumulation with no human capital or technical progress. In addition, the key points can be made for the case with σ = 1 and n = 1.

In the overlapping generations model with two-period lifetimes, this equation reduces nicely to a first-order difference equation (Problem 14). This is because the right-hand side can be reduced to the consumption behavior of a single generation whose consumption depends only on period t wages and thus only on \( k_{t} \). The old generation consumes all its income. As a result, their income and their consumption are equal and cancel from the right-hand side of the transition equation.

Consider the next oldest generation, who is in the last period of its working life. This generation’s working life began three periods ago. Their consumption behavior in period t will depend on the wages they earned in each of those periods. Thus, wages as far back at period t-3 will appear in the transition equation. The wages in each period are determined by the capital–labor ratio from that period. This implies that the transition equation will be a fifth-order difference equation, including the variables, \( k_{t + 1} ,k_{t} ,k_{t - 1} ,k_{t - 2} ,k_{t - 3} \). The important point is that the state variables, here the capital–labor ratios, characterizing the economy increase as the number of periods of the life-cycle increase. This curse of dimensionality raises the computational complexity of the model when the number of periods in the life cycle is large.

In contrast, if one assumes that the generations are linked by intergenerational financial transfers, the transition equation of the economy is a second-order difference equation, no matter how many periods in the life cycle are included. To see this, first note that as long as financial intergenerational transfers link the generations together, then we can write \( C_{t} = \kappa N_{t} c_{1t} \) (see Problem 10). As periods in the life cycle are added, only the value of κ changes. For example, κ = 2, with two periods of life, and κ = 5, if there are five periods of life.

This is a second-order difference equation in \( k_{t} \) that is completely independent of the number of periods in the life cycle. Thus, the infinitely lived agent simplification is able to avoid the dreaded curse of dimensionality . A very nifty and useful result.

The lesson is that if you want to do computations, use the infinitely lived agent approach whenever you can get away with it (e.g., business cycle analysis). Unfortunately, the evidence suggests that for the issues we examine in this book, those that directly focus on private intergenerational transfers and government policies that transfer resources across generations, one must stick with the overlapping generations approach.