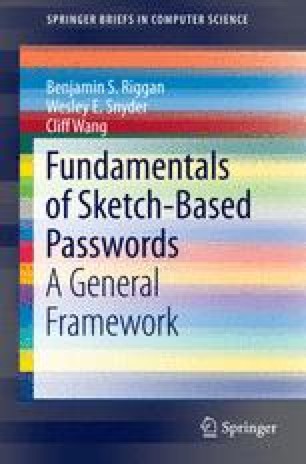 This chapter considers two different recognition/matching algorithms, namely dynamic time warping (DTW) and Simple K-Space (SKS). Both algorithms utilize classical pattern recognition techniques to the novel application of sketch-based password. While more sophisticated techniques are possible, DTW and SKS are chosen because the inherent nature of the underlying problem is easily perceived using the approaches. Plus, the fundamental concepts discussed in the chapter generalize beyond the specific algorithmic implementation. The overall sketch-based authentication framework is outlined in this chapter using DTW and SKS. The respective implementation details are rigorously discussed, from which the philosophies are compared and contrasted. In particular, these methods have a similar objective, but different parameterizations, operating spaces, and computational complexities.

Resampling the sketches is a critical implementation detail that is sometime overlooked in sketch-based authentication. In this appendix, both linear and cubic interpolation methods are discussed for resampling. While there are many other methods of interpolation, these are simple, efficient, and sufficiently accurate for the purposes of this brief.

A trivial solution is to use a linear interpolant to determine the unknown points around the sketch. Linear interpolation uses a two point neighborhood since two points are necessary for determining the equation of a line. Given that \(t \in [t_i,~t_{i+1}]\), then the interpolation is computed using
$$\begin{aligned} f(t)=a_1\left (\frac{t-t_i}{t_{i+1}-t_i} \right) + a_0\end{aligned}$$
where
$$\begin{aligned} a_1 &= -\frac{1}{2} f(t_{i}) + \frac{1}{2} f(t_{i+1}) \\ a_0 &= f(t_{i})\end{aligned}$$
and \(\left \{\left (f(t_i), t_i\right),~\left (f(t_{i+1}), t_{i+1}\right) \right \}\) is the two point neighborhood of i th discrete sample point on the sketch.
Linear interpolation is a quick and easy solution, but it is not very accurate when considering the nonlinearity of many sketches. More importantly, since curvature (i.e. a second derivative) is used in the recognition algorithm, this implies that linear interpolation only yields curvature information at points between two different interpolants. Therefore, a higher order interpolation is necessary. Table 3.1 provides information about various higher order interpolants for purposes of comparison (Fig. 3.5).
Table 3.1

A comparison of different ordered interpolations

Curvature is well defined in the continuous domain, however, estimating curvature in the discrete domain is more difficult because of the sampling process.