Bifurcation and Degradation of Geomaterials in the New Millennium 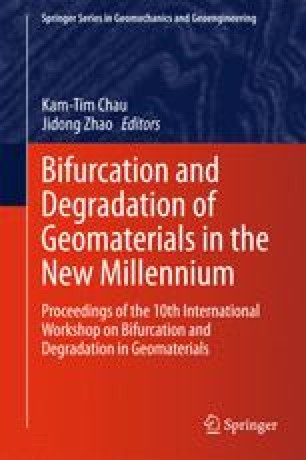 International Workshop on Bifurcation and Degradation in Geomaterials

IWBDG 2014: Bifurcation and Degradation of Geomaterials in the New Millennium pp 83-90 | Cite as

A series of torsion shear experiments was performed on large hollow cylinder specimens of Fine Nevada sand with major principal stress directions relative to vertical, α, varying from 0° to 90° and with the intermediate principal stress, σ2, varying from σ3 to σ1 as indicated by b = (σ2 − σ3)/(σ1 − σ3). The Fine Nevada sand was deposited by dry pluviation, thus producing a sand fabric with horizontal bedding planes and cross-anisotropic characteristics. The various stress conditions were achieved by varying the pressures inside and outside the hollow cylinder specimen relative to the shear stress and the vertical deviator stress according to a pre-calculated pattern. All stresses and all strains were determined from careful measurements so that analysis of the soil behavior could be made reliably. The soil behavior was determined for a pattern of combinations of α varying with increments of 22.5° from 0° to 90° and b varying with increments of 0.25 from 0.0 to 1.0. Thus, 25 test locations were established, but many tests were repeated to study the consistency of the results. The friction angles varied considerably with α and b, thus indicating the importance of the intermediate principal stress and the principal stress directions relative to the horizontal bedding planes. The observed shear bands essentially followed the expected directions, but due to the cross-anisotropy, shear bands were also observed in the direction of the major principal stress in regions with high b-values. The strength variation was also influenced by the flexibility of the boundaries in these regions.

Shear Band Principal Stress Void Ratio Intermediate Principal Stress Principal Stress Direction
These keywords were added by machine and not by the authors. This process is experimental and the keywords may be updated as the learning algorithm improves.
This is a preview of subscription content, log in to check access.

The research presented here was performed with support from the National Science Foundation under Grant No. CMMI-0757827. Grateful appreciation is expressed for this support.