Postal and Delivery Innovation in the Digital Economy 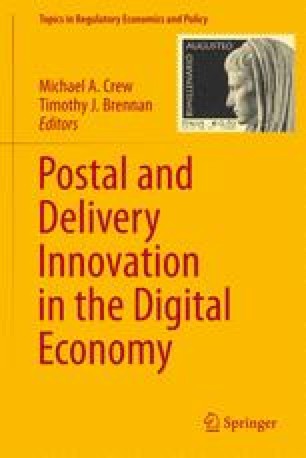 E-commerce and the Return of Unwanted Goods: A Case for Cooperation Among Providers of Postal and Non-postal Parcel Services

With the rapid development of e-commerce, new forms of distance sales have developed. Although consumers still prefer to order goods from domestic suppliers, the market for consumer goods has grown global. As a consequence, the European Commission in its Green Paper on Parcels (European Commission 2012, p. 4) expresses its intention to improve the conditions for the cross-border transportation of goods in order to facilitate e-commerce. In Chap. B of the Roadmap issued subsequently to its Green Paper (European Commission 2013), the Commission defined as its objective to help boost e-commerce in the EU by providing e-traders and consumers with parcel delivery services that meet their needs in terms of quality, accessibility and affordability. The Roadmap defined two areas of concern: from the consumers’ perspective, the lack of transparency and information about available redress mechanisms; and from the e-traders’ perspective, a lack of transparency on delivery services and choice of availability of delivery solutions. In addition, the Roadmap focuses on the lack of interoperability between delivery companies when faced with diverging operational solutions.

Post Office Private Operator Return Service Branch Office Essential Facility
These keywords were added by machine and not by the authors. This process is experimental and the keywords may be updated as the learning algorithm improves.

The analysis contained in this chapter reflects the personal views of the author and is not related to any litigation involving any of the parties.

Cite this chapter as:
Wojtek R. (2015) E-commerce and the Return of Unwanted Goods: A Case for Cooperation Among Providers of Postal and Non-postal Parcel Services. In: Crew M., Brennan T. (eds) Postal and Delivery Innovation in the Digital Economy. Topics in Regulatory Economics and Policy, vol 50. Springer, Cham. https://doi.org/10.1007/978-3-319-12874-0_2