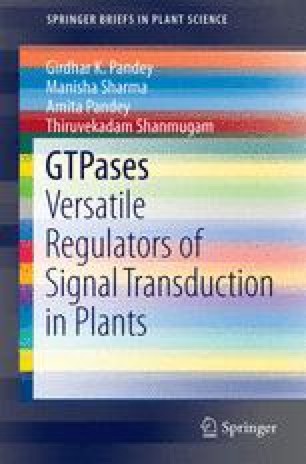 Sequence, Structure, and Domain Analysis of GTPases in Plants

The multifunctional plant-specific RAC/ROP GTPases have been implicated in important development processes. Extensive gene database search was used to identify members of the small GTPase family in crop plant rice. Rice genome was found to contain 85 expressed OsROP (RHO/RAC) proteins. The phylogenetic analysis indicated that these GTPases could be categorically classified into four different subfamilies. The phylogeny also revealed that there are small GTPase genes, which do not fall into any of the already categorized small GTPase families indicating their early diversion in the course of evolution. The comparative phylogeny including Arabidopsis, human, and yeast divulged the relatedness among the homologs in each species and made it possible to redraw the possible functional relationship. Domain analysis also indicated conservation of G domain in the protein sequences of rice, Arabidopsis, human, and yeast. As assumed, the G1 box, GTP-binding signature sequence, was found heavily conserved and characteristic sequence pattern was obtained.