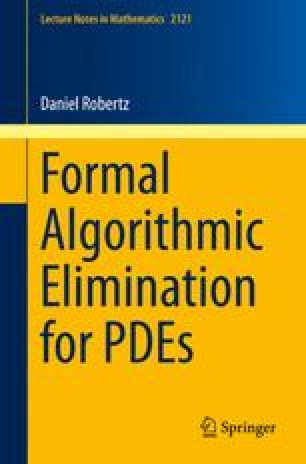 This chapter discusses formal methods which transform a system of partial differential equations (PDEs) into an equivalent form that allows to determine its power series solutions. Janet’s algorithm deals with the case of systems of linear PDEs. The first section presents a generalization of this algorithm to linear functional equations defined over Ore algebras. As a byproduct of a Janet basis computation, a generalized Hilbert series enumerates either a vector space basis for the linear equations that are consequences of the given system or those Taylor coefficients of a power series solution of the PDE system which can be chosen arbitrarily. Systems of polynomially nonlinear PDEs are treated in the second section from the same point of view. A Thomas decomposition of such a system consists of finitely many so-called simple differential systems whose sets of solutions form a partition of the solution set of the given system. Each simple differential system admits a straightforward method of determining its power series solutions. If the given PDE system generates a prime differential ideal, then exactly one of the simple differential systems is the most generic one in a precise sense. Both Janet’s and Thomas’ algorithm also solve certain elimination problems as described and employed in the following chapter.

Differential System Hilbert Series Differential Algebra Differential Polynomial Differential Ideal
These keywords were added by machine and not by the authors. This process is experimental and the keywords may be updated as the learning algorithm improves.
This is a preview of subscription content, log in to check access.