Estuarine Morphodynamics of the Sunderbans 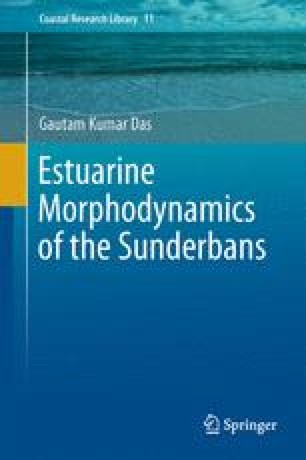 Estuarine Morphodynamics of the Sunderbans pp 177-198 | Cite as

The vibrant ecosystem of Sunderbans with its lush green mangrove forest, various types of aquatic species including many rare endemic flora and fauna, birds, crocodiles and the famous Royal Bengal Tiger is a unique Biosphere Reserve. Unfortunately such a productive ecosystem is now exposed to threats of extinction. Besides the natural global phenomena, the land degrading anthropogenic activity is one of the prime factors for this ecological decline. In a forest-society interface, unplanned over exploitation of natural resources is very common. In the case of Sunderbans also, as a result of continuously increasing population pressure almost half of the mangrove forest have been cut down to supply fuel wood, land reclamation for settlement and aquaculture and various other purposes. The situation has become precarious as there seems to be a striking imbalance between exploitation and replenishment, thereby making the ecosystem most fragile. Indiscriminate prawn seed collection, refuse and sewerage discharge from urban areas, spillage of toxic pollutants as well as trashes in the tourist spots of Sunderbans are other anthropogenic factors responsible for environmental degradation of the area. Suitable strategies for the conservation and maintenance of optimum ecological condition of this unique biodiversity have to be planned involving local people, Government and other social organizations.