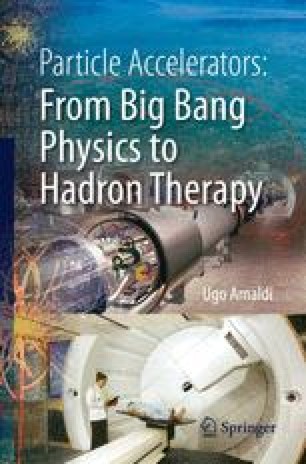 After the invention of repeated acceleration, applied in the cyclotron of Ernest Lawrence, all the experts of the period were convinced that Wideröe’s idea of the linear accelerator (Fig. 1.10) no longer had a future. All except one: Luis Alvarez, who was one of the most inventive scientists of the twentieth century. After the war he convinced himself that, at a sufficiently high energy, the cost of the circular accelerator would become prohibitive and therefore decided to use the new techniques of radiofrequency circuits to construct the first proton linear accelerator; after many highs and lows, in 1947 he succeeded to make it work.

Linear Accelerator Particle Accelerator Brookhaven National Laboratory Bubble Chamber European Laboratory
These keywords were added by machine and not by the authors. This process is experimental and the keywords may be updated as the learning algorithm improves.
This is a preview of subscription content, log in to check access.