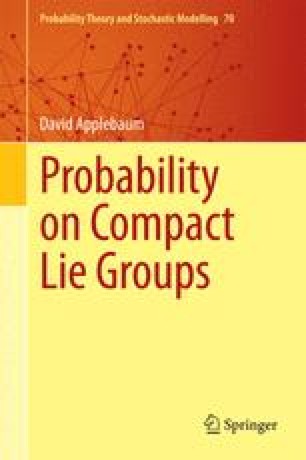 We study the Laplacian from an analytic viewpoint as a self-adjoint operator with discrete eigenvalues given by the Casimir spectrum. This leads naturally to a study of Sobolev spaces, which are also characterised from a Fourier analytic viewpoint. We introduce Sugiura’s zeta function as a tool to study regularity of Fourier series on groups. In particular, we find conditions for absolute and uniform convergence, and for smoothness. Smoothness is characterised by means of the Sugiura space of rapidly decreasing functions defined on the space of highest weights, and we will utilise this in the next chapter to study probability measures on groups that have smooth densities.

Fourier Series Zeta Function Heat Kernel Compact Group Topological Vector Space
These keywords were added by machine and not by the authors. This process is experimental and the keywords may be updated as the learning algorithm improves.
This is a preview of subscription content, log in to check access.