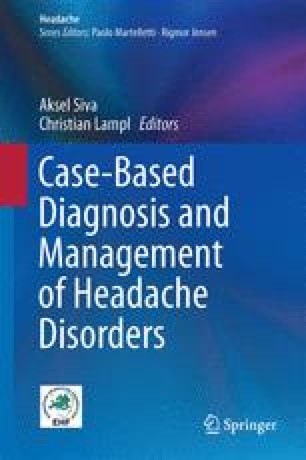 Migraine Without Aura, with a Discussion of Trigger Factors

A 38-year-old Caucasian woman suffering from headache attacks that interfered with activities of daily living visited a headache specialist for the first time. The frequency and severity of her headache attacks had increased over the previous 4 months, and she was suffering one or two attacks every week. Her attacks were throbbing and mostly one-sided, either on the right or the left side of her head. The pain would start from the neck and spread to the forehead in some attacks, but in most it would start from the temple on one side and spread behind the ipsilateral eye. During headache attacks, any movement of her head would increase the intensity of headache, and light and noise would disturb her. Severe attacks were associated with nausea without vomiting. She experienced increased sensitivity to touch on her scalp, predominantly on the headache side and particularly during severe headache attacks. Just before an attack, she would yawn repeatedly. She had never experienced any visual, sensory, or speech problem or any transient neurological dysfunction preceding the headache. In the absence of taking any painkiller such as ibuprofen or another nonsteroidal anti-inflammatory drug, the headaches could last up to 3 days. The intensity of her headache attacks was generally severe. She was a manager in public relations in a large company. If she had a severe headache she was unable to perform any work activities and sometimes had to go home when she could not successfully treat the pain. Five months earlier, her position in the company had changed and she was given additional responsibilities. She was married with two daughters, 13 and 5 years old. Her headache attacks had started nearly 1 year after her first delivery. The frequency of attacks was one or two times a month up to the second pregnancy. For 2 years after the first delivery she was taking oral contraceptive pills (OCPs), but had to stop taking them because of a marked increase in the frequency of headache attacks. During the second pregnancy she had almost no headache attacks, but 1 week after the delivery her attacks returned, with pain more severe than before.

Cluster Headache Migraine Attack Migraine Headache Migraine With Aura Oral Contraceptive Pill
These keywords were added by machine and not by the authors. This process is experimental and the keywords may be updated as the learning algorithm improves.
This is a preview of subscription content, log in to check access.