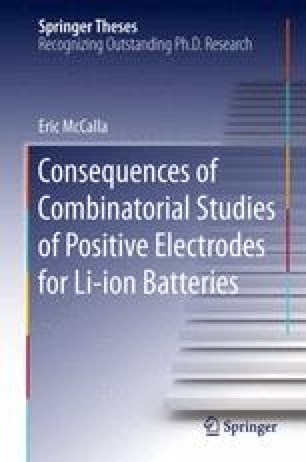 The phase diagrams obtained for quenched samples show that in both three-phase regions all samples contain some of the N and S phases, while during slow cooling they convert to structures containing at least some R and M phases. Though the thermodynamics of this are complex, a qualitative understanding can be achieved by considering the results of the Rietveld refinement. The R and M phases were collectively more ordered than the N and S phases (the N phase in particular showed considerable disorder in the hexagonal layers). This would suggest that the R and M phases have lower combined internal energies and lower combined entropies than the combination of the N and S phases. Since the structure of the three-phase regions at high temperature is driven by entropy, the N and S phases are present in all points in the regions. Upon slow cooling, a temperature is reached where internal energy becomes more important and there is still sufficient thermal energy for atomic transport such that the R and M phases begin to appear in all samples. Further study is required to have a better understanding of the thermodynamics and kinetics of these phase transformations.

Slow Cool Rietveld Refinement Layered Region Lever Rule Coexistence Region
These keywords were added by machine and not by the authors. This process is experimental and the keywords may be updated as the learning algorithm improves.
This is a preview of subscription content, log in to check access.