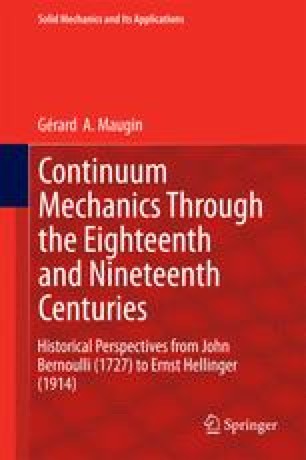 The Cosserat brothers published in 1909 an original book where they favour a variational formulation of continuum mechanics together with an invariance which they call “Euclidean invariance” of the Lagrangian-Hamiltonian action. This strategy places on an equal footing translations and possible rotational degrees of freedom, yielding in a natural way what is now commonly called the theory of Cosserat or oriented—or polar—continua with asymmetric stresses and the new notion of couple stresses. Here their landmark work is replaced in its epoch making context underlining the influences they benefited from and the influence they have exerted on their direct contemporaries and much later on (in the second-half of the twentieth century). The sociological scientific environment of the early twentieth century and the typical publication strategy of the time are outlined, explaining thus the Cosserats’ own strategy. The further reception of their work from 1909 to the Second World War and the revival of interest in it in the nineteen-fifties are examined critically. Finally, the formalization of their work in a new landscape of continuum thermo-mechanics created essentially by Truesdell is evoked together with other influences and further developments.

Partial English Translation of E. and F. Cosserat, “Théorie des Corps Déformables”, Hermann, Paris, 1909, by Gérard A. Maugin (Only the First Chapter on General considerations is translated; original footnotes are reported to the end and numbered consecutively. Translator’s remarks are placed within square brackets in the main text. This is a verbatim translation without any ambition of literary prowess (Figs. 8.1, 8.2, 8.3).

This volume contains the development of a note on the Theory of the Euclidean action that Appell has thought appropriate to introduce in the second edition [1909] of his Treatise on Rational Mechanics. The reproduction of an appendix to the French edition of the Treatise of Physics of Chwolson, explains several peculiarities of the editing and the reference that we make to a previous work on the dynamics of the point and of a rigid body, which is here also combined with the work of the Russian scientist. We took advantage of this new print to correct several mistakes in our text.

Presently, we do not seek to deduce all the consequences of the general results that we will obtain; throughout, we make the effort only to rediscover and clarify the classical theories. In order for this kind of checking of the theory of the Euclidean action to appear more complete, in each part of our exposition we will have to establish the form that the equations of deformable bodies take when one is limited to the consideration of infinitely close states; however, this is a point that we have already addressed, with all necessary details, in our first memoir on the Theory of elasticity that we wrote in 1896 (Annales de la Faculté des Sciences de Toulouse, Vol. X). Moreover, we suppose that the magisterial lessons of G. Darboux on the general theory of surfaces are completely familiar to the reader.

Our researches will make sense only when we have shown how one may envision the theories of heat and electricity by following the already followed path. We devoted two notes to this subject in Volumes III and IV of Chwolson’s treatise. The subdivision, to use a pragmatic language, appears to be a scientific necessity; nevertheless, one must not loose sight of the fact that it answers deep questions. We have tried to provide an idea of these difficulties in our note on the Theory of slender bodies published in 1908 in the Comptes Rendus of the Académie des Sciences and whose contents were also mentioned by Appell in his treatise.

The primary form of mechanics is inductive; this is what one clearly perceives in the theory of deformable bodies. This theory has first borrowed from the mechanics of invariable [rigid] bodies the propositions relative to the notion of static force, that were applied with the principle of solidification [“rigidification” due to Cauchy]; then the relation between the effort and the deformation was hypothetically first established (generalized Hooke’s law), and then only one looked a posteriori under what conditions this was conserved (Green). Carnot9 already mentioned, one century ago, the defect of this method, where it is constantly called for a priori notions, and where the followed path is not always safe. The static force in fact does not have the effect of a constructive definition, in our classical form of mechanics, and the influence of the reform that Reech10 proposed regarding that matter in 1852 remained practically unknown until our present time. Perhaps that this is due to the long uncertainty in which elasticians remained concerning the rational foundation that can be attributed to Hooke’s law. Analogous hesitations have indeed been manifested, almost in the same form, in other domains of physics11.

In order to escape from these difficulties, Helmholtz tried to construct what is called an energetics, that relies on the principle of least action and on the very idea of energy, the force, whatever its nature, becoming then a secondary notion of deductive origin. But the principle of a minimum in natural phenomena12 and the concept of energy13 itself bring us to confront the defects of the inductive method. Why a minimum and what definition to be granted to energy to avoid having simply a physical theory, but a truly mechanical theory? Helmholtz does not seem to have left an answer to these questions. However, he contributed to establish more completely than done before the distinction between the two notions, energy and action, that apparently are identified in classical dynamics. We believe that one must start from the latter [the action] to make perfectly precise the views of Helmholtz and to give to mechanics, or more generally, theoretical physics, a perfectly deductive form.

When we are concerned with the motion of a point, the essential element that enters the definition of action is the Euclidean distance between two infinitesimally close positions of the mobile point. We have shown previously14 that one can deduce from this single notion all fundamental definitions of classical dynamics, those of quantity of motion [linear momentum], of force and of energy.

Here we propose to establish that we can follow an identical path in the study of the static deformation or the dynamics of discrete systems of points and continuous bodies, and that we arrive thus to the construction of a general theory of action in both extension and motion, that embraces all that, in theoretical physics, is directly governed by the laws of mechanics.

It will suffice to consider the variation of this action to be led to the definition of the quantity of motion, those of efforts and moment of deformation, of the external force and moment, and finally those of the energy of deformation and of motion, via the intermediary of the notion of work.

In this theory, statics will become entirely autonomous, in agreement with the views of Carnot and Reech; we will simply have to take for this purpose a density of action W independent of the velocities \(\left( {\xi ,\eta ,\xi } \right),\,\left( {p,q,r} \right)\), that is, to consider a body devoid of inertia, or else a body with inertia on the condition to regard deformation as a reversible transformation in the sense of M. Duhem. On the other hand, having recourse to the notion of hidden arguments [i.e., arguments that do not appear explicitly in W], we will recover all the concepts of mechanical origin that are employed in physics, for instance, those of flexible and inextensible lines [strings], flexible and inextensible surfaces, invariable [i.e., rigid] bodies, as also less particular definitions as proposed for a deformable line since D. Bernoulli and Euler till Thomson and Tait, for the deformable surface since Sophie Germain and Lagrange till Lord Rayleigh, and for the deformable media since Navier and Green till Lord Kelvin and W. Voigt.

Envisaging both deformation and motion, we shall arrive in a purely deductive manner at the idea that is contained in the principle of d’Alembert, which relates only to the case where an action of deformation separates fully from the kinetic action. Finally, if we suppose that the deformable body is not submitted to any action from the external world and if we introduce, as a consequence, the fundamental notion of isolated system, of which M. Duhem15, and the M. Le Roy16 have shown the necessity for a rational construction of theoretical physics, we shall naturally be led to the idea of a minimum that Helmholtz had already considered as a starting point, while simultaneously there will appear the principle of conservation of energy, which is at the basis of our present scientific system.

Its generality allows one to foresee that there are singular phenomena, both in the action on the motion and in the deformation of extension, for example the aspect of solids in a plastic state or near fracture, and that of fluids submitted to large forces. In ordinary circumstances, this generality can be reduced by the consideration of a state that is infinitesimally close to the natural state; this is a point that we already mentioned in our preceding note.

But we can still assume that one or two dimensions of the deformable body become infinitesimally small and then envisage what is called a slender body 18. This notion was developed in 1828 by Poisson, also a short time afterwards, by Cauchy; their aim, like that of all elasticians preoccupied later by this arduous question, was to build a passage between the distinct theories of bodies with one, two and three dimensions. We know that an important part of the works of Barré de Saint-Venant and Kirchhoff is related to a discussion of the researches by Poisson and Cauchy. However, these scientists, and then their followers, did not exhibit the true difficulty of the matter; this difficulty resides, generally, in the fact that the zero value of the introduced parameter is not an ordinary point, as admitted by Poisson and Cauchy, not even a pole, but an essential singular point. This important fact justifies the separate studies of lines, surfaces and [3D] media that the reader will find in the present work19.

[Here the Cosserats touch upon a fundamental problem that concerns singular perturbations; this matter will be solved only in the 1960s-1980s for the limit reduction to slender bodies with the correct asymptotic methods (in particular “asymptotic integration” and the “zoom technique”) developed by Gol’denveizer in Russia, Ambartsumian in Armenia, Berdichevsky in Moscow, and Ph. Ciarlet and Destuynder in France].

In concluding these preliminary observations, we shall remark that the theory of Euclidean action relies on the notion of differential invariant taken in its simplest form. If we enlarge this notion in such a way as to understand the idea of differential parameter, modern theoretical physics appears as an immediate extension, from the Eulerian viewpoint, of mechanics per se, and we are naturally led to the principles of the theory of heat and to the actual electric doctrines. This new field of research, in which here we start to enter by deducing from the consideration of deformable bodies the idea of radiation of energy, will be explored more completely in a further work [This ambitious programme was never really formulated; F. Cosserat died in 1914]. We shall thus introduce a new precision in the views of H. Lorentz20 and H. Poincaré21 in what is called the principle of reaction in mechanics.