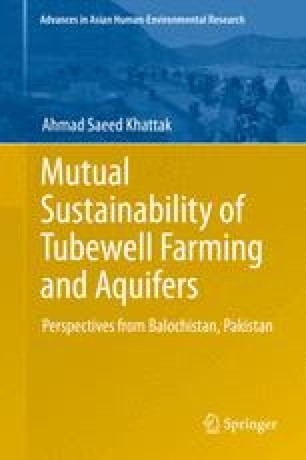 This study analyses the interdependent changes in tubewell irrigated agriculture and aquifer potential within a time frame of 28 years, starting from 1981. The reason for tracking this dual issue from 1981 is rooted in the environment created by the military occupation of Afghanistan by the former USSR in 1979. Apparently, to counter and check the socialist philosophy in the region, the USA made Pakistan its frontline ally and provided financial aid/loans to her over the next couple of years. A US-sponsored NGO, USAID, was very active in this regard. Besides her, some other wealthy countries of the US camp also assisted Pakistan in various development projects in the early 1980s. Thus, that was the peak time for the study area to become widely electrified. This brought a boom in tubewells; and thus the enormous exploitation of the aquifer set in. This chapter discusses the material used and the methodology applied in the study at hand. The research is based on questionnaire surveys and satellite images. Besides time-series data of agricultural land use, watertable, water quality, and farm income, the point data of certain variables, like cropping pattern, institutional role, etc. has also been used. This chapter entails the types and sources of data, the history and strengths of Landsat data, sampling procedure, survey tools, etc.; and the software and techniques used for data processing and analysis.