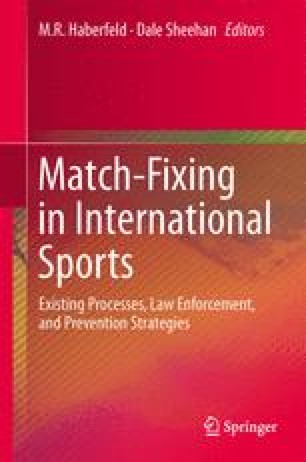 In the last decade the Italian professional leagues were involved in several police investigations. The episodes uncovered were connected with two of the largest match fixing scandals in Europe involving criminal organizations, soccer players, team managers, and referees. These investigations, also known as Calciopoli and Scommessopoli, offer unique case studies to understand the mechanisms behind match fixing in professional football.

In this chapter we exploit the information collected in these investigations to evaluate the economic determinants of corruption in sports. We proceed in three steps. First, we offer a brief overview of the main facts and probes of the Italian scandals showing that Calciopoli and Scommessopoli are two completely different types of corruption with changing actors and mechanisms. While in the Calciopoli scandal corruption is a tool to obtain a particular sport result (corruption for sport results), in Scommessopoli the fixing is strictly related to bias and to illegal gains from betting markets (corruption for betting results). Secondly, we explain the differences of the cases reported by the police using the tools, notably the decision trees, provided by economic theory. Finally, we draw from our analysis to present some suggestions as to how to detect and prevent future episodes of match rigging. Particular emphasis is put on the first type of corruption, while most of the literature to date on devising measures to reduce corruption concentrates on illegal gains from betting markets.

Team Manager Soccer Player Criminal Organization Police Investigation Career Concern
These keywords were added by machine and not by the authors. This process is experimental and the keywords may be updated as the learning algorithm improves.

This chapter is inspired by the presentations during the session Where do we go from here-what Interpol wants? And at the following discussion at the conference Interpol Global Academic Experts. Meeting for Integrity in Sport, held in Singapore, November 28–29th, 2012. We also benefitted from informal conversations with Simone Farina, John Foot, and Daniela Giuffrè. All errors are our own.