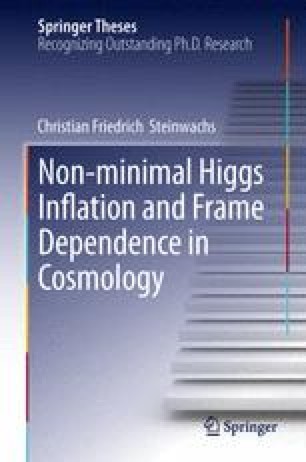 Nowadays, particle physics as well as cosmology are on the edge of new experimental progress. During the next few years, the Large Hadron Collider at CERN as well as satellites like PLANCK will advance to energy scales and to a level of accuracy that have been unreached so far. From a theoretical perspective, the hitherto covered experimental scales are mainly described by the Standard Model of Particle Physics and the cosmological \(\wedge \) CDM model that is ultimately based on Einstein’s theory of General Relativity. However, theoretical considerations as well as the so-far unexplained microscopic origin of observed phenomena, e.g. dark energy, suggest that the Standard Model and General Relativity do not have a fundamental character. Rather, they have to be considered as effective theories, valid only within a limited range. In this thesis, we will adopt this pragmatic viewpoint of an effective field theory.We expect that there is an underlying, more fundamental theory, but we are not interested in its details. Instead, we will focus on the well-established theories of the Standard Model and cosmology and look for a minimal extension in order to unify them in accordance with experimental data.

Large Hadron Collider Pragmatic Viewpoint Dark Energy Well-established Theory Experimental Progress
These keywords were added by machine and not by the authors. This process is experimental and the keywords may be updated as the learning algorithm improves.
This is a preview of subscription content, log in to check access.