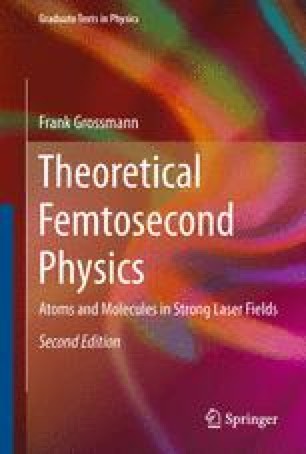 In this chapter, we start with the theoretical description of the coupling of a classical light field realized, e.g., by a laser, to a quantum mechanical system. Different gauges, related by unitary transformations are then introduced. After the study of the Volkov solution of the time-dependent Schrödinger equation for the free particle in a laser field, some analytically solvable driven two-level systems will be discussed in the remainder of this chapter. The phenomenon of Rabi oscillations and the fundamental rotating wave approximation are thereby going to be reviewed.

Unitary Transformation Laser Field Rabi Frequency Hamilton Matrix Rotating Wave Approximation
These keywords were added by machine and not by the authors. This process is experimental and the keywords may be updated as the learning algorithm improves.
This is a preview of subscription content, log in to check access.

As we will see in Chap.  5 exact crossings of the quasienergies as a function of external parameters are of utmost importance for the quantum dynamics of periodically driven systems. For stationary systems, the possibility of exact crossings has been studied in the heyday of quantum theory by von Neumann and Wigner [21]. These authors found that eigenvalues of eigenfunctions with different parity may approach each other arbitrarily closely and may thus cross exactly. This is in contrast to eigenvalues of the same parity, which always have to be at a finite distance, a fact which is sometimes referred to as the non-crossing rule. The corresponding behavior in the spectrum as a function of external parameters is called allowed, respectively avoided crossing. In the Floquet case, the Hamiltonian can also be represented by a Hermitian matrix, see e.g. ( 2.162), and therefore the same reasoning applies with parity replaced by generalized parity.

For the investigations to be presented in Sect.  5.4.1 it is decisive if these exact crossings are singular events in parameter space or if they can occur by variation of just a single parameter. In [21] it has been shown that for Hermitian matrices (of finite dimension) with complex (real) elements the variation of three (two) free parameters is necessary in order for two eigenvalues to cross. Using similar arguments, it can be shown that for a real Hermitian matrix with alternatingly empty off-diagonals (as it is e.g. the case for the Floquet matrix of the periodically driven, quartic, symmetric, bistable potential) the variation of a single parameter is enough to make two quasienergies cross.

In the case of avoided crossings an interesting behavior of the corresponding eigenfunctions can be observed. There is a continuous change in the structure in position space if one goes through the avoided crossing [22]. Pictorially this is very nicely represented in the example of the driven quantum well, depicted in Fig. 3.3, taken out of [23], where for reasons of better visualization the Husimi transform of the quasi-eigenfunctions as a function of action angle variables (J,Θ) [24] is shown.

Appendix B: Two-Level System in an Incoherent Field