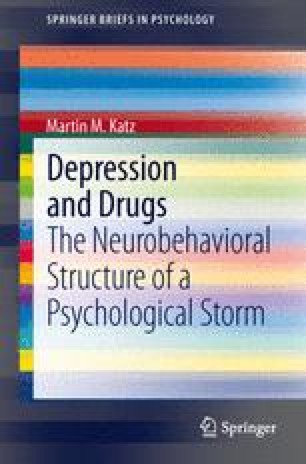 Dimensions of Depression: The Conflictual Structure of the Depressed State

Chapter
Part of the SpringerBriefs in Psychology book series (BRIEFSPSYCHOL)

Interrelationships of the behavioral components of the disorder and derived quantitative measures for each were analyzed through study of 130 severely depressed patients. Patients were drawn from six hospitals in the NIMH Collaborative Study of the Psychobiology of Depression. Most variation among the behavioral elements was accounted for by three dimensions, each derived by combining 2–4 of the 11 constructs; (1) anxiety-agitation-somatization; (2) depressed mood-motor retardation; and (3) hostility-interpersonal sensitivity. High severity in each explain the depressed feeling and turmoil experienced by the severely ill providing a structure for interpreting the major forces that create the condition. The first dimension reflects an aroused central nervous system state; the second, the recognizable “core” aspect of depression and retardation. Depressed mood and anxiety are viewed as emanating from different central nervous system sources. New theory about the nature of depression acknowledges that these central nervous system states are opposed, their conflictual nature helping to explain the simultaneous depression and turmoil experienced by the severely ill. By recognizing the important role of hostility, the analysis exposes neglect of this central emotion in clinical research slowing the development of new treatments. Acceptance of the disorder as “multifaceted,” not a singular state, renders actions of the antidepressants more understandable. Drug profile actions are a function of the different relationships that the critical central neurotransmitter systems have with the various behaviors and moods. New guidelines for research on mechanisms will prevent the same errors of perspective in the new “genetics” era of research.

Cite this chapter as:
Katz M.M. (2013) Dimensions of Depression: The Conflictual Structure of the Depressed State. In: Depression and Drugs. SpringerBriefs in Psychology. Springer, Heidelberg