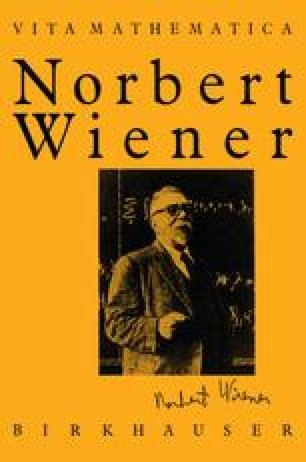 From Postulate Systems to the Brownian Motion and Potential Theory

After his discharge from the U.S. Army in January 1919, Wiener took a job with the Boston Herald as a reporter, to tide him until his return to academic life in the fall. He was asked to cover the strike in the textile industry in Lawrence, Massachusetts, and Wiener gives an interesting account of how his sympathies swung toward labor as he learned more and more of the facts [53h, pp. 266–268]. The Herald published Wiener’s reports on the strike, but the editors did not like his handling of his next assignment, on the candidacy of General C. B. Edwards for president of the United States, and he was fired. Wiener’s explanation of this seems plausible: “… I had not learned to write with enthusiasm of a cause in which I did not believe” [53h, p. 268]. Wiener now had spare time at his disposal, which he spent on studying mathematics and writing papers.

Brownian Motion Dirichlet Problem Convex Body Potential Theory Hausdorff Dimension
These keywords were added by machine and not by the authors. This process is experimental and the keywords may be updated as the learning algorithm improves.
This is a preview of subscription content, log in to check access.