Scenes from the History of Real Functions 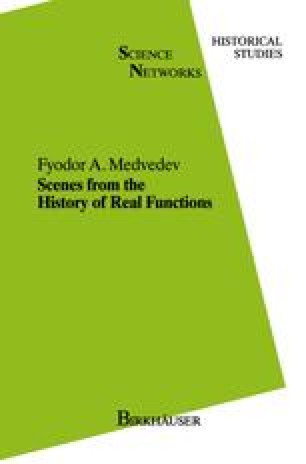 The derivative and the integral in their historical connection

The two preceding essays are constructed in general, so to speak, according to the principle of microscopic examination of particular details in the development of certain ideas of the theory of functions, at least in the earlier stages. Such a method has its advantages, enabling the author to concentrate on the points of interest and trace the course of one stream of thought or another whose confluence forms a broader stream of ideas. With this method it becomes possible to approach nearer to the causal connections and trace the role not only of the leading scholars but also the toilers in the vineyards of science whose activity is not only useful but also necessary. For a correct understanding of the course of historical development this is essential, for “the history of science does not reduce to the exposition of only the ideas of the first-rate minds… the progress of science depends no less on the way in which these epoch-making discoveries are prepared for by the day-to-day labor of many hundreds of scholars of lesser rank, the way in which particular problems gradually lead to the posing of general problems, the creation of general methods of investigation, and the formation of general scientific concepts” (Gnedenko, [1, p. 111).

Point Function Seventeenth Century Differential Calculus Transcendental Function Differential Method
These keywords were added by machine and not by the authors. This process is experimental and the keywords may be updated as the learning algorithm improves.
This is a preview of subscription content, log in to check access.