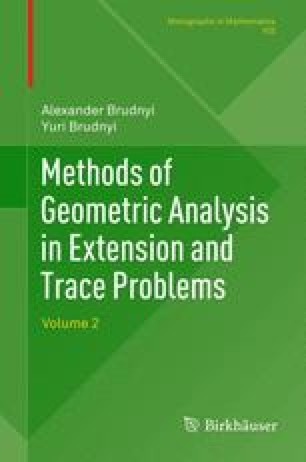 The chapter is designed for the study of metric spaces admitting simultaneous Lipschitz extensions for each of their subspaces. The theory of such spaces developed by the authors of the book will be presented here while some of its basic ingredients (spaces of pointwise homogeneous type and of metric balls, embeddings in spaceforms etc.) have been considered in Volume I. This allows us to simplify and shorten the exposition. The theory includes methods of constructing the corresponding linear extension operators. For the time being, three di_erent methods have been developed independently and at the same time. The _rst of them, due to Lang and Schlichenmaier, was presented in Chapter 6. Because of the generality of their approach working both in nonlinear and linear settings, the corresponding estimates of extension constants are far from being optimal. Two other methods are much better in this respect, giving estimates close to optimal. One of them, due to Lee and Naor, exploits a probabilistic argument based on the stochastic decompositions that _rst appeared in Computer Science, see, e.g., Volume I, Section 4.1. Another one, due to the authors of the present book, is constructive and covers a wider class of metric spaces.

Extension Operator Carnot Group Ultrametric Space Uniform Lattice Extension Constant
These keywords were added by machine and not by the authors. This process is experimental and the keywords may be updated as the learning algorithm improves.
This is a preview of subscription content, log in to check access.