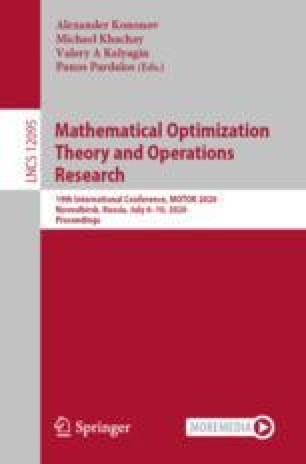 On Non-elitist Evolutionary Algorithms Optimizing Fitness Functions with a Plateau

We consider the expected runtime of non-elitist evolutionary algorithms (EAs), when they are applied to a family of fitness functions \(\text {Plateau} _r\) with a plateau of second-best fitness in a Hamming ball of radius r around a unique global optimum. On one hand, using the level-based theorems, we obtain polynomial upper bounds on the expected runtime for some modes of non-elitist EA based on unbiased mutation and the bitwise mutation in particular. On the other hand, we show that the EA with fitness proportionate selection is inefficient if the bitwise mutation is used with the standard settings of mutation probability.

The work was funded by program of fundamental scientific research of the Russian Academy of Sciences, I.5.1., project 0314-2019-0019. The author is grateful to Duc-Cuong Dang for helpful comments on preliminary version of the paper.

Our lower bound is based on the negative drift theorem for populations [14].

We also use a corollary of this theorem (Corollary 1 from [14]):

To bound the expected optimisation time of Algorithm 1 from above, we use the level-based analysis [2]. The following theorem is a re-formulation of Corollary 7 from [2], tailored to the case of no recombination.

Note that literally the formulation of Corollary 2 in [2] gives the bound (3) only for the expected runtime, but it is easy to see from the proof therein that the bound actually holds for the expected number \(T_0\) of the first population that contains at least \(\gamma _0 \lambda \) individuals in level \(A_{m}\) as we put it in Theorem 7. This slight improvement is important in Sect. 3.

As an alternative to Theorem 7 we use the new level-based theorem based on the multiplicative up-drift [7]. Theorem 3.2 from [7] implies the following.

Theorem 8 improves on Theorem 7 in terms of dependence of the runtime bound denominator on \(\delta \), but only gives an asymptotical bound. Its proof is analogous to that of Theorem 7 and may be found in [3].

The proof is analogous to that of the main result in [9].

This appendix contains the proofs provided for the sake of completeness.