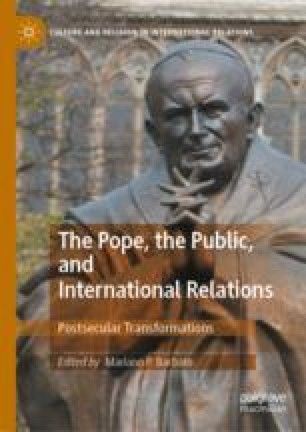 The Pope, the Public, and International Relations pp 25-43 | Cite as

Papal Diplomacy and the Rise of @pontifex

This chapter explores the significance of the pope’s presence on Twitter to evaluate the pope’s diplomatic practices. It does so by bridging studies on ‘traditional’ diplomacy with scholarly work on the rise of the so-called ‘digital diplomacy’, and by evaluating how the pope’s diplomatic practices on- and off-line diverge from what it is generally considered to be the ‘standard’ in diplomatic practice. By employing a combination of discourse and content analysis to study the tweets by Pope Francis, the chapter explores how the pope’s digital diplomacy perpetuates the practice of assigning to the pope the function of representing not a state but God in the diplomatic arena, as well as allowing the pope to reach not only experts in the public state business but a global public even beyond Catholicism.