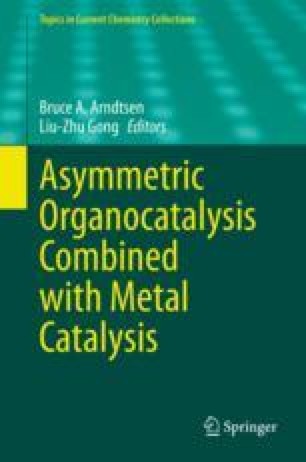 Since the pioneering independent reports of Akiyama and Terada, the use of chiral phosphoric acids (CPAs) and derivatives as a versatile tool for asymmetric synthesis with good reactivity, regioselectivity, diastereoselectivity and enantioselectivity has emerged, forming an important part of the implementation of asymmetric counteranion- directed catalysis reported to date. In these achievements, the combination of metals with CPAs has enabled various catalytic modes beyond the scope of typical acid catalysis, such as relay catalysis, ion-pairing catalysis, and binary acid catalysis. The first-row transition metals (Sc–Zn) are considered to be sustainable transition metals and have received a great deal of attention. These naturally abundant metals display excellent Lewis acidity and function as powerful redox catalysts in synthesis involving both one and two-electron transfers. Hence, in this chapter, we summarize recent advances in the development of asymmetric reactions using a combination of first-row transition metals and CPAs. Furthermore, we provide a detailed discussion of the mechanisms involved in order to understand the interaction of the metal/phosphate and the origins of the asymmetric control of the transformations.