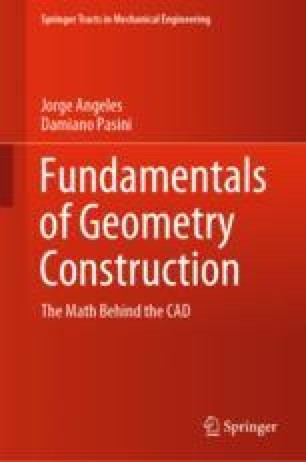 This chapter is devoted to objects defined by sets of points lying in 3D space, i.e., located in a reference frame \(X,\, Y,\, Z\). The counterpart of points and lines are similar to those studied in Chap.  2. Lines are defined as in Chap.  2, and given by one point and one unit vector, which now has three components. A major difference between the current chapter and Chap.  2 lies in that a rigid body is now a solid object, delimited by a boundary that is a surface. Moreover, one novel concept is the distance between two skew lines, a concept that did not arise in Chap.  2. Furthermore, because of their extensive applications in design, quadrics, i.e., three-dimensional surfaces defined by a smooth quadratic function of three independent variables, \(f(x,y,z) =0\), are given due attention. In particular, cylinders, cones and spheres are given due attention, as these surfaces find applications in the design of multiple mechanical objects, some with rather complex forms, namely, spur and bevel gears. One more class of objects of interest in design is regular polyhedra, the 3D counterparts of regular polygons in 2D. Modern applications of such polyhedra to the design of multiaxis accelerometers, of the utmost importance for inertial navigation, are highlighted.