An Economic Approach to the Plagiarism of Music 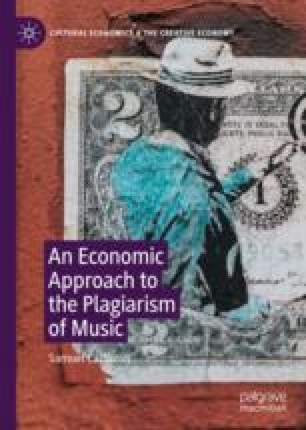 Plagiarism the Old Fashioned Way: Steal from a Composition

This chapter begins by looking at some ‘exceptions that prove the rule’ cases of self-plagiarism in music to establish why it is generally disregarded. We then move on to look at the defences of subconscious musical plagiarism and the use of quotation as a form of parody which is legally allowed in many countries. There is a specific discussion of Weird Al Yankovic and some lesser known serial parodists. The importance of the ‘vexatious litigant’ cases brought by Ira Arnstein against the composers of the ‘great American songbook’ body of work is highlighted in terms of dissuading litigation in the pre-digital era. There is an extended discussion of creativity in the composition and production of music to help contextualise the defence against plagiarism that any use of prior elements, from others, has been subject to ‘transformative’ enhancement. The chapter concludes with reference to the doctrine of laches, in law, to give a background to the presence of legal cases being permitted despite very long passages of time since the supposed plagiarism took place.