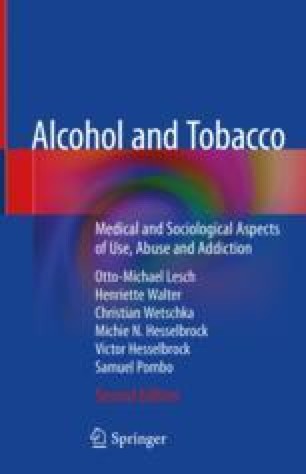 Information About the Origination of This Book

As alcohol and tobacco consumption often occur concomitantly, scientific and therapeutic interest in both the substances has significantly increased over the past years. The concomitant use has clearly more damaging effects than alcohol or tobacco use by itself. In practice, patients have often mentioned that they were able to quit the consumption of one substance without difficulty, but at the same time increased the consumption of the other (e.g. if the patients managed to quit smoking, their alcohol consumption significantly increased). Our knowledge about dependencies is permanently expanding and basic research keeps improving explanations of the functioning of specific brain circuits. Therefore, it is very important for us to deliver findings that clinical practitioners can apply in therapy or during consultations with tobacco and alcohol dependents. A differentiation between phenomena like the reward system, dependence memory, withdrawal symptoms or the craving for tobacco and alcohol is needed in order to carry out objective therapy and consultation. Very old concepts can still be found in the literature today (Bleuler 1983; Forel 1921; Haller 2017; Consensus Statement 2007), which are formulated into general rules for the therapy of dependents. Yet, often, these authors use values which are unacceptable today. Relapse is always viewed as something negative and the negative stigma of the “dependence” diagnosis still remains a problem. This book will try to deliver objective information which shows that dependence has nothing to do with faults or personal weakness. Practitioners have divorced themselves from these general therapy guidelines and now use “individual therapy for every patient”. These therapies are “therapy according to dimensions”, “resource-oriented therapy” or therapy which accepts unchangeable variables and seeks to influence changeable variables. Although we principally agree with these modern approaches, this book will nevertheless outline factors with global validity, which has been shown to be effective in the therapy of dependent patients. Scientific findings about subgroups according to Lesch’s typology form the basis of therapy, but often need to be modified according to the individual. The desire for change should be strengthened and the improvement of the competence to change should be increased, and this procedure should be the start of every therapeutic process. Especially to motivation processes according to subgroups and to anti-craving medications according to subgroups, a lot of new data have been published, and therefore, it was necessary to publish the second edition of the book. Henriette Walter and I asked other experts for help, who are mainly from the psychological and neurophysiological point of view, and worked on the different motivation processes. Classifications according to subgroups that suggest that dependencies are exclusively caused by the effects of a substance can often be found in the literature. In this book, we will outline different interactions between personality, environment and the effects of the substance.