The Decline of Public Access and Neo-Liberal Media Regimes 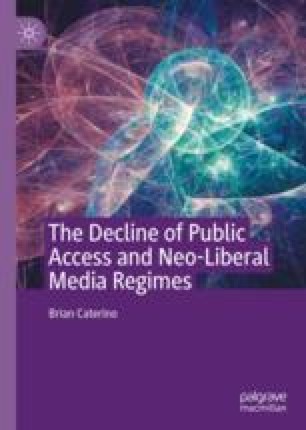 The decline of public access was not primarily a matter of technological changes but began much earlier in the attempts to eliminate or at least limit the public obligations of cable providers and of over-the-air broadcasters. These were part of the neoliberal reshaping of the economic and political sphere including the public sphere. The principles of participatory democracy and public ownership of the airwaves, including some extensions to cable, gave way to a vision of communication media as private property and reject models of the public good as rooted in popular sovereignty. In neoliberalism, privatization redistributes wealth and power to the wealthy, leading to an artificial austerity that affects all levels of government.